The global circuit breaker market is projected to reach US$8.196 billion by 2026, at a CAGR of 6.08%, from an estimated US$5.422 billion in 2019. The market is expected to be driven by the increasing projects of renewable energy, efficient energy infrastructure, and increasing developmental projects, as they are in turn increasing the demand for electricity consumption (especially in developing countries).  Rapid industrialization and urbanization in the countries along with the use of sustainable energy sources (renewable energy) cater to the increase in demand for power consumption in the economies, which in turn is increasing the demand for circuit breakers in the upcoming years. Though, intense competition from the gray market and stringent environmental and safety regulations are impacting the market. As the gray market is the unorganized sector which supplies low-quality products at a competitive price in the market. Gray market distribution channel is more wide range across the different regions among the consumers which also hinders the growth of the companies in the circuit breaker market. For the companies, there are growth opportunities in developing countries (smart cities), power infrastructure development, and HVDC transmissions. In other words, companies with new innovations and research & development in infrastructure facilities and products have positive growth in the upcoming future.

By insulation type, the market is segmented as air circuit breakers, oil circuit breakers, gas circuit breakers, and others. Among them, there is potential growth in the air circuit breakers’ market due to an increase in renewable energy, as the demand for ACBs will increase because it helps to manage the load in power plants. Hence, ACBs will hold a significant market share. By installation type, the market is segmented into outdoor and indoor. Among them, outdoor is projected to hold a significant market share, while by voltage type, the market is segmented into low, medium, and high voltage, where medium and high voltage holds the substantial market share because of the potential growth in ACBs segment. This does not mean that the low voltage segment won’t have growth in the forecast period, the demand for home appliances with low voltage is also increasing which will cater to the growth of the low voltage. This also implies that among end-users, industrial uses will significantly the market. By rated voltage, 15-50kV will have a significant market share due to increasing demand from commercial and industrial uses. 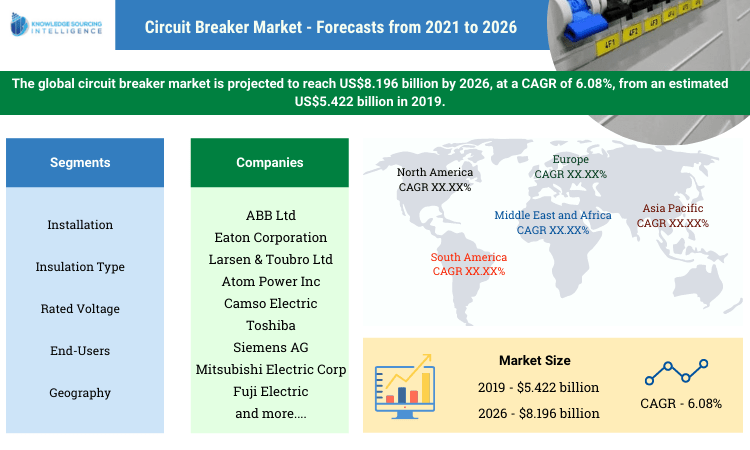 Due to the pandemic, the growth of the circuit breaker market has a slowdown in 2020 but is expected to regain its growth in the forecast period because of the rising demand and developmental projects in the countries along with the support of the government initiatives. In the upcoming future, the government is promoting sustainable development with efficient energy consumption through the use of renewable energy sources, which require circuit breakers to prevent damages, short-circuits, and transmission issues.  Covid-19 has affected the global circuit breaker market severely as the demand for power consumption falls which in turn impacted the manufacturing and construction activities in this market. People are working from home, which has reduced the demand for power consumption especially in commercial and manufacturing sectors, and hence, affecting the circuit breaker market.

The global pandemic put pressure on the healthcare sector and reduces investment in the power industry. This has impacted the growth of the circuit breaker market, although, the growing demand for renewable energy is boosting the demand for circuit breakers to prevent short circuits and damages in industrial applications such as hotels, commercial buildings, and so on.

Recently, ABB India has launched Formula DIN-Rail (a wide range of MCBs and RCCBs) and isolators for the electrical retail market for residential and commercial units to produce protection from damages such as overload, short circuits, and earth leakages. In 2020, Siemens has launched arc-resistant and non-arc resistant type SDV-R for medium voltages into the market for renewable energy applications. Siemens has acquired the company, C&S Electric to grow further in developing countries for electronification products. Eaton Cummins Automated Transmission Technologies has expanded itself by expanding its Endurant series. Circuit Breaker Sales NE has acquired one company in 2018 in the US state. The company is majorly targeting the electrical equipment sector.

The Asia Pacific is predicted to have an attractive region for the global circuit breaker market and will have a significant share of the market, due to the increasing population in this region, and hence, the demand for power consumption is booming there. Another reason is industrialization and economic development, especially in China, India, South Korea, and Japan. Given that the government is promoting renewable energy sources, there is an increase in developments related to renewable energy generation in this region, there is a need to combine this generation with the current electrical infrastructure, which in turn will further promote the circuit breaker market, mainly for air circuit breakers.

On the other hand, North America has the potential growth due to the growth in the manufacturing sector because of the increasing demand for electrical machinery, while the European region has strong transmission and distribution infrastructure which in turn is attracting good investment options there.

The Middle East and Africa demand for circuit breakers mainly coming from the oil and gas industry, where Africa is mainly focusing on the infrastructure aspects of the power supply.

Q3. What is the size of the global circuit breaker market?
A3. Circuit Breaker market was valued at US$5.422 billion in 2019.

Q5. What factors are anticipated to drive the circuit breaker market growth?
A5. Rapid industrialization and urbanization in the countries along with the use of sustainable energy sources (renewable energy) cater to the increase in demand for power consumption in the economies, which in turn is increasing the demand for circuit breakers.