The global solar energy market is growing at a significant rate in recent years and has been expected to increase more in the upcoming years. The major driving forces for such growth in this market are increasing concerns of the economies towards environmental sustainability and decarbonization making the power energy companies improvise their technology towards renewable sources in an efficient way. To support this, governments are also providing rebate policies to further promote the renewable energy market. Solar energy comes up as the third renewable source of energy across the world, and one of the reliable sources from household consumption’s point of view. People can have solar energy systems on their rooftops and though, the main concern for the general people to use the cost and the space of plantation of the solar energy. The Covid-19 has slowed the progress a little, but as per the IEA report, the renewable energy sector is most resilient to the crisis and will continue to grow as forecast. Despite the disruption in each sector, solar energy is expected to remain resilient in 2020. However, irrespective of the growing revenue, the cost of production for companies is also decreasing due to government policies, thus, increasing the scope of future strategic investment for the companies in the coming years.

In the upcoming years, all the countries that have potential growth of solar energy, Germany, India, and the US are having significant potential to grow. India is planning to increase the dependency of electricity more on renewable sources to 55% by 2030 as the demand has been projected to increase by 15280 TWH by 2040 and investments will increase to US$ 500 billion by 2028 (source: IBEF). It can be noticed that there may be a growth of the PV solar plants in the coming period due to cost-competitiveness. While US has accounted for the 8300 MW installed capacity in 43 states in 2019, representing over 70% of all the commercial solar capacity installed in the US (source: SEIA)). The top companies of the US are also shifting their technology towards solar energy, having Apple and Amazon have the highest installed capacity among them. 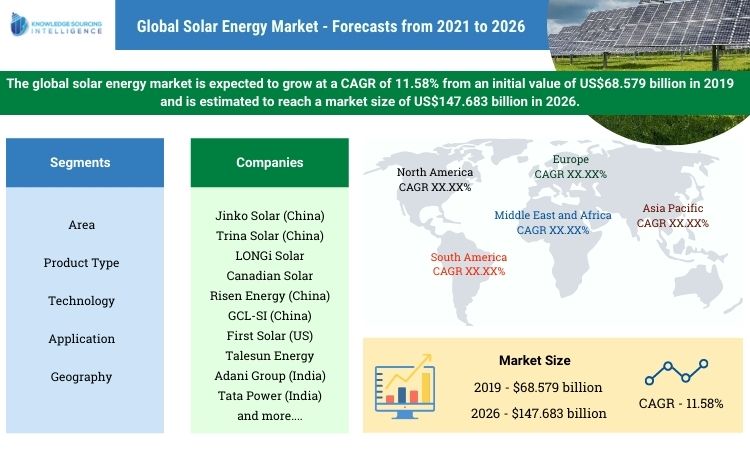 There are mainly 4 types of technology used, among which thin-film sheet is acquiring a significant share in the solar projects, mainly in commercial and utility-scale projects due to the lightweight and low cost of installation. Although, thin sheets are having less effective as compared to the crystalline silicon segment (both mono and poly) which is mainly used in the premium segment of the solar market at present.

Solar energy can be captured for electricity production using:

With the anticipated improvements in technology and increased supply of panels from China/Europe, the capital costs are expected to stabilize at lower levels. As a result, investors/developers are expected to focus on the commercial viability of solar projects.

By location, the global solar energy market is segmented into rural and urban areas. The rural areas have the potential growth of solar energy as the countries are providing incentives to the companies that will establish the solar power plants in rural areas. This will lead to the improvement of the living standard of the people and improvise the areas as well.  In many countries, it has one of the lowest costs – both in residential and commercial applications, but also increasingly in the utility-scale field, even if external costs are not added to fossil fuels and nuclear power. Still, solar power’s share is in most markets is insignificant, although, decarbonization through electrification of heat, transport, and power sectors offer huge solar business opportunities. While digital solar & storage business models are taking off for residential and commercial consumers, smart building technologies reveal their potential to optimize self-consumption rates of the building stock and smoothen grid feed-in, which enables a cleaner yet reliable electricity supply.

In Germany, a market introduction program for residential storage systems limits the feed-in behavior of PV systems to less than 50% of its maximum output. Due to this limitation, the feed-in during peak generation is reduced. Applying an optimized generation and storing strategy allows increasing the existing grid capacity for PV power. This allows the integration of more renewable electricity within the same grid design, avoiding network upgrades. Solar & Storage shall have a right for grid connection and fair, consumer contract level metering costs.

As per the WE Forum, India will need to double its electricity output by 2030 to meet this massive rise in demand, while also honoring its commitment to reduce its carbon footprint by 35% from 2005 levels. This would require roughly half the additional output to come from renewables, which translates to adding 25 GW of renewable capacity annually until 2030. An expansion of this magnitude will require funding of around $76 billion by 2022, growing to $250 billion during 2023-30, as per India’s Economic Survey 2018-19. Therefore, on an annualized basis, investment opportunities of over $30 billion are expected to emerge in the next decade and beyond, about three times current levels - clearly indicating a huge and untapped investment potential.

Concluding, the solar energy market is having potential growth in the upcoming years, mainly in PV solar systems due to lower costs, easy installation, and potential government policies which will promote environmental sustainability as well.

Q5. What factors are anticipated to drive the solar energy market growth?
A5. The major driving forces for such growth in the solar energy market are increasing concerns of the economies towards environmental sustainability and decarbonization making the power energy companies improvise their technology towards renewable sources in an efficient way.