Aircraft have to withstand harsh weather conditions, flex, bend, etc. as they are miles above the ground. A large variety of materials and finishes are used to protect and give the desired appearance to the aircraft. The paint used for an aircraft is a special type of paint used for commercial aviation aircraft, both new and old. The different types of paints used for the aircraft are primers, enamels, lacquers, epoxy, and other multipart finishing formulas. The paints used have high durability to withstand adverse conditions. The paint used for aircraft does not easily wear off, as it is highly durable due to which the airlines prefer to get their planes painted according to the design and color of their choice. The growing number of air travelers has led to an increase in the number of trips an aircraft has to make. According to the International Civil Aviation Organization (ICAO), there were around 4.3 billion airline passengers carried in 2018, which is expected to grow to approximately 10 billion by 2040. The rise in the number of air travelers will result in the increased wear and tear of the aircraft, which, in turn, will accelerate the demand for aircraft paints in the market during the forecast period. Aircraft paints are used to protect both the interiors and exteriors of the aircraft. The interiors are unexposed to harsh conditions, aircraft paint is used to protect them from corrosion and deterioration. Whereas, for the exposed surfaces such as the exteriors, aircraft paints are used to provide protection and a pleasing appearance. Aircraft also use decorative paints for enhancing the physical appeal of the aircraft by using the paints for painting the company’s logo and emblems, application of decals, identification numbers, and letters of the aircraft. The multiple uses of aircraft paints are projected to drive the market in the years to come.

In addition, airlines across the world are largely investing in the procurement of new next-generation aircraft, coupled with the increased spending by companies in aircraft repairs and maintenance, which will further fuel the aircraft paints market growth. Moreover, the recent developments in new eco-friendly aircraft painting and coating products, which can reduce weight and increase fuel efficiency are expected to support the growth of the market during the forecast period. Furthermore, the United States has the largest aerospace industry in the world. According to the Federal Aviation Administration (FAA), the total active general aviation fleet is expected to increase from 212,885 in 2018 to 211,575 aircraft by 2039, owing to the growth in air cargo. The growth in air cargo will further cause the wear and tear of the aircraft, which will result in the increasing usage of aircraft painted in the next few years.

By end-user, the commercial aviation sector is estimated to hold a significant market share as commercial aircraft are used for passenger and cargo transport operations. The growth of the commercial aviation sector is primarily due to the increase in the tourism industry across the globe, the increase in the number of aircraft trips will lead to the early deterioration of the aircraft’s paint, which in turn will fuel the market growth. By application, the exterior paint segment is projected to hold a notable market share as the aircraft have to withstand harsh weather conditions due to which the wear and tear of the aircraft take place. Hence, the exterior paints need to be frequently changed, which will impend the market growth.

Geographically, the Asia-Pacific region is expected to acquire a dominant market share owing to the rise in air travel, and the growing military aircraft procurements by developing economies such as China and India, which is expected to propel the growth of the market. Also, to attract more air passengers, airlines like China Eastern Airlines and Hainan Airlines, are implementing fancy themes, which are further expected to increase the demand for aircraft paints during the forecast period. 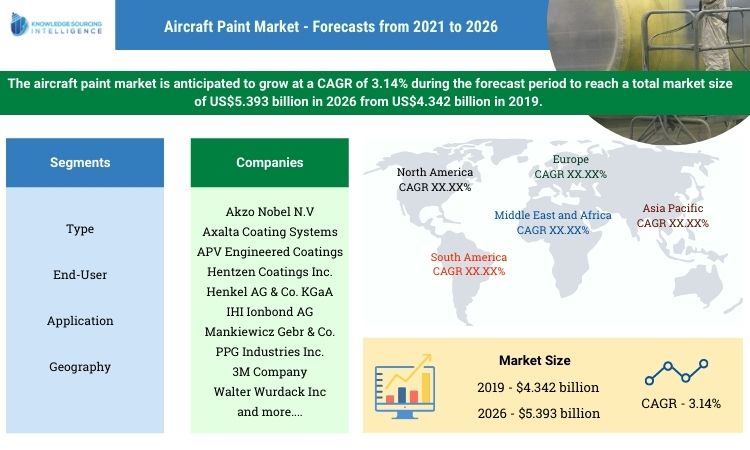 The constant increase in the number of air travelers due to the rise in disposable income of the people, rapid urbanization, lifestyle changes, and medical travel is bound to amplify the market growth for aircraft paints during the forecast period. The tourism industry is rapidly growing due to the availability of cheap air tickets and the increased propensity of travelers to spend on holidays and leisure trips. According to a report by the World Bank Group, the number of air passengers (domestic and international) reached 4.233 billion by 2018 from 2.628 billion in 2010. The increase in tourism will thus bolster the market during the forecast period.

Owing to the increasing globalization and international trade among countries the demand for air cargo and business-related travel has considerably increased over the last few years. According to IATA, goods worth $6.8 trillion are transported by air cargo every year, which represents 35% of international trade. In April 2021, the demand for air cargo went up by 9% and is expected to increase in the next few years. Hence, the increase in air cargo will drive the growth of the market as the aircraft will require to make more trips which will result in frequent wear and tear, increasing the demand for aircraft paints in the market.

The costs associated with frequently painting the interiors or exteriors of an aircraft are very high. The airlines may not want to invest huge funds frequently to repaint the aircraft. The airline may look for cheaper alternatives, which may hamper the growth of the market.

Impact of COVID–19 on the Aircraft Paint Market

The Covid-19 pandemic moderately impacted the growth of the aircraft paint market due to the temporary suspension in travel activities, globally. The governing bodies of several countries imposed a ban on travel which adversely affected the commercial aviation sector. Also, the halt in aircraft manufacturing due to the non-availability of labor and raw material due to supply chain disruption further hampered the market growth. Moreover, the restrictions on international trade and business activities limited air cargo activities, which negatively impacted the market growth. However, with the lift in the travel ban and trade activities, across the globe, the market for aircraft paint is expected to rebound in the next few years.

Prominent/major key market players in the Aircraft Paint Market include Akzo Nobel N.V, Axalta Coating Systems, APV Engineered Coatings, Hentzen Coatings Inc., Henkel AG & Co. KGaA, IHI Ionbond AG, Mankiewicz Gebr & Co., PPG Industries Inc., 3M Company, and Walter Wurdack Inc. The players in the Aircraft Paint Market are implementing various growth strategies to gain a competitive advantage over their competitors in this market. For Instance, in May 2021, PPG Industries Inc., a global supplier of paints, coatings, and specialty materials announced to have received regulatory approval from the Federal Antimonopoly Service of Russia for the completion of its tender offer for all shares of Tikkurila Oyj, a Finnish manufacturer of paints and lacquers. Major market players in the market have been covered along with their relative competitive strategies in this report and the report mentions recent deals and investments of different market players over the last few years. The company profiles section details the business overview, financial performance (public companies) for the past few years, key products and services being offered along with the recent deals and investments of these important players in the Aircraft Paint Market.

Q4. What factors are anticipated to drive the aircraft paint market growth?
A4. The rise in the number of air travelers will result in the increased wear and tear of the aircraft, which, in turn, will accelerate the demand for aircraft paints in the market.