A conveyor system has been known as a systematic and rapid mechanical handling equipment for transferring goods, and materials within a specific enclosed area. The key advantage of conveyor systems is that it reduces human error, minimize workplace risks and accidents, and also help in the reduction of labor costs. The conveyor systems are also widely used in the movement of heavy, bulk goods and materials from one place to another. It is classified and used as wheels, belts, chains, or rollers to transfer goods and loads. Major firms and corporations have been investing a considerable sum of capital to develop novel, safer and advanced conveyor systems for their customers. Asia Pacific region is expected to play a major role in the market growth, due to the high and stronger manufacturing sector and other related factors. The increasing regulations and standards by various organizations, countries, and others, intending to enhance the workplace safety standards are expected to play a major role in the development of advanced conveyor systems, worldwide. These trends and developments are projected to drive market growth, in the coming years.

The market growth is expected to surge by the increasing capital investment intending in the development of novel and advanced products.

There have been considerable developments in the market, in the past few years.

In September 2021, CR, a major player in the market, announced a novel partnership with a major firm, KBSS. The key partnership was announced to bring CR's conveyor systems to Western Australia. This development is essential for the market growth in the Pilbara region in Australia. 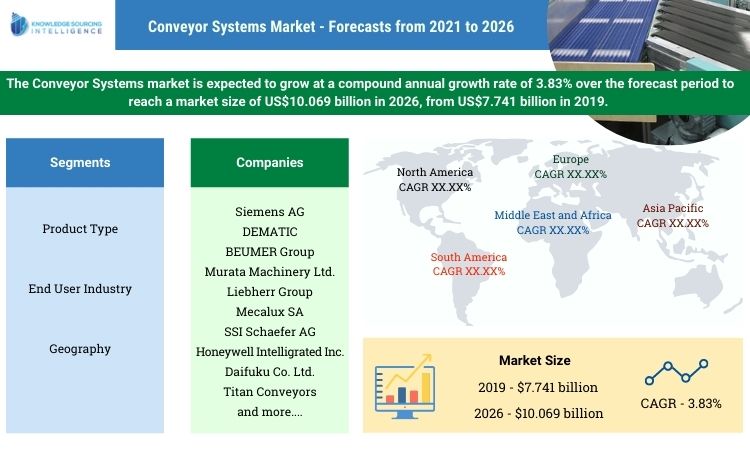 Increasing use in the automotive industry

The market is expected to surge in the coming years, due to the rising use of conveyor systems in the automotive sector, worldwide. The rising disposable income and increasing populations are expected to drive the production of vehicles, worldwide. According to the data given by the International Organisation of Motor Vehicle Manufacturers, around 91.7 million vehicles were produced in 2019. Major firms have been offering conveyor systems for automotive sectors. The growth of electric vehicles is also expected to drive the market growth. For instance, Industrial Kinetics Inc., one of the key players in the market, has been offering and providing custom-designed conveyors for automotive applications. The company provides these systems for the assembly process for several automotive parts. These trends and developments are projected to enhance the market growth, in the coming years.

Q1. What is the size of the global conveyor systems market?
A1. Conveyor Systems market was valued at US$7.741 billion in 2019.