The LiDAR drone market is expected to grow at a compound annual growth rate of 14.98% over the analyzed period to reach a market size of US$5.898 billion in 2026 from US$2.220 billion in 2019. The prime driver surging the growth in the market is surging government expenditure for strengthening defense and military. LiDAR technology helps in monitoring and controlling the targeted area.

General LiDAR instruments principally consist of a laser, a scanner, and a unique GPS receiver. These tools help in mapping the targeted area, be it natural or man-made, with accuracy, flexibility, and precision. This technology is widely used for security purposes and by scientists and mapping professionals for producing accurate shorelines, construct digital elevation models of geographic for information systems and insights. This system also assists in emergency response operations for better assessment of the situation. For security forces, it facilitates a clear and better picture of the ground and facilitates the location of terrorist/ offenders or unwanted objects. Surging terrorism has resulted in huge investment in the LiDAR system for better security and defense. Airplanes and helicopters are the most common platforms where these systems are used.

Based on Application the sector is segmented into agriculture and precision forestry, civil engineering and surveying, environmental and coastal monitoring, highways and road networks, military and defense, mining, quarries, and aggregates, and others. In addition to defense and emergency services, the environmental and coastal monitoring and civil engineering and surveying sectors are anticipated to contribute significantly to the robust market demand. Increasing adoption of LiDAR technology for better and effective operations facilitates greater results. During the 2010 Haiti earthquake disaster, technology played a crucial role in mapping the landscape and speeding the rescue of people stuck. Moreover, the technology is widely adopted in autonomous vehicles for better traffic management and lower accidental risk. Furthermore, the growth of self-driving cars has huge market potential for the technology. Also, this technology is widely used in airplanes and helicopters for better assessment of the region.

Based on Installation the market is segmented into airborne, topographic, bathymetric, terrestrial, mobile, and static. The bathymetric and topographic LiDAR system is anticipated to have huge market potential during the forecasted period. Bathymetric LiDAR is widely used for marine monition as the technology use water-penetrating green light which efficiently measures seafloor and riverbed elevations. The topographic LiDAR system, on the other hand, is more efficient to map the land and uses a near-infrared laser for better assessment. Airborne systems also have a huge market prospectus with surging air transportations and operations.

The huge cost of the LiDAR system may constrain market growth.

The high cost of purchase and installation may constraint the market growth of LiDAR technology. LiDAR systems and sensors cost thousands of dollars and are quite expensive for mainstream cars or other devices. The installation cost of a single LiDAR system in a car is $10,000, increasing the end cost of the car significantly. Global leading self-driving car manufacturer, Tesla stated that the reason the company is not using the LiDAR technology is the high cost. Tesla aims to manufacture modern cars which are affordable and the LiDAR technology increases the price of their cars. Hence the market faces tough competition from radar technology and is hindered by the huge cost. 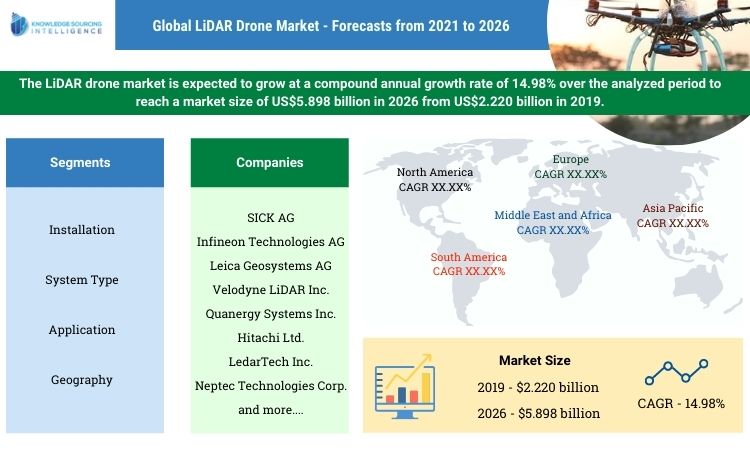 The North American region is expected to have huge market growth during the forecasted period. The Middle East, African, and Asia Pacific regions will be growing at the fastest rates.

Based on geography, the LiDAR Drone market is segmented into the North American region, the South American region, the Middle East and African region, the European region, and the Asia Pacific region. The North American and European regions are anticipated to have a dominating share during the forecasted period owing to huge government and private corporation expenditure on the technology. Security and service sectors are the prime employers of technology. Rising cases of terrorism have further increased the expenditure by the government. In the U.S., more than half of the population is worried about being a victim of terrorism while a third of the population refrain from activities such as travel abroad, attend mass events, fly on airplanes, and others as they are afraid of terrorism. Anxiety and fear of terrorism spiked among people after the 9/11 attack, London bombing, Boston Marathon bombings, and attack on Paris. The governments are increasing their expenditures for better protection. The US government, for instance, increased the military and defense sector budget by 15.5% in 2018, in comparison with 2017, to the US $700 billion. The general government expenditure in the European region on defense expenditure was around 1.2% of GDP in 2019 (Source: Eurostat). A significant share of this expenditure is made in LiDAR technology.

The Middle East, African, and the Asia Pacific region are anticipated to grow at the fastest rate owing to surging terrorism cases and the region being the prime target of terrorists. In 2017, 40.9% of global terrorist activities were undertaken in the Middle East and North African region while 28.9% were in South Asia and 25.3% were observed in Sub-Shara Africa. Further, a rise in disposable incomes and technological advancement, particularly in the Middle East and the Asian region, will boost the market.

8.5.The Middle East and Africa