The advent of COVID-19 had an adverse impact on the global marine winches market since the pandemic brought the activities in various industries to a standstill which restricted major industrial activities wherein the focus of the manufacturing and other industries shifted to keep the processes going even at less than half the actual capacity. The huge dip in the industrial processes owing to the pandemic in several countries slowed the growth of the marine winches market to a significant level in the year 2020. With the industries getting back on track and recovering after suffering losses due to the pandemic, the processes will resume that were unable to continue due to lockdown protocols earlier. Moreover, the sales of commercial and personal boats dipped during the initial months of the year owing to the lockdown which led to the shutting down of the sellers for a certain period initially. With the industries recovering after the pandemic gradually. The growth of the marine winches market is expected to show a gradual increase initially but is expected to witness rapid growth after the industries resume activities at full capacity during the forecast period owing to the increasing demand of the services across the world. 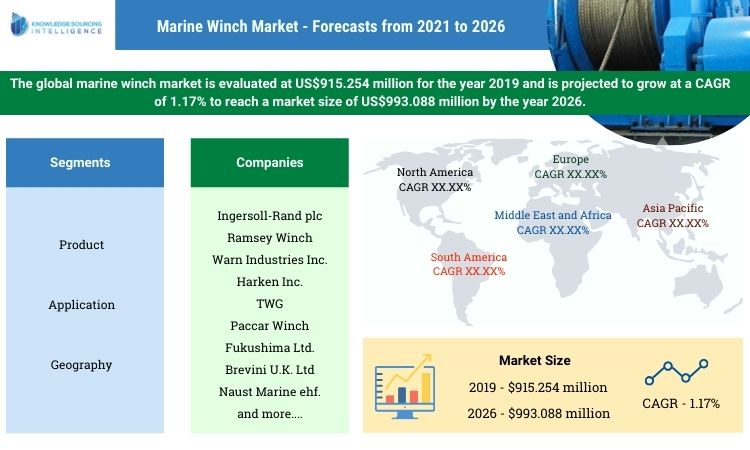 The rise in the number of shipbuilding businesses and the increasing recreational boating business in recent years at a global level will drive the market during the forecast period.

The growth of the marine winches market is expected to be fuelled by the increasing pace of the shipbuilding business owing to its rising demand from consumers. For instance, according to the report by NMMA, the retail unit of sales of powerboats has increased significantly over the years withstanding at 280,000 in the year 2019 which was the second-highest since 2007. Furthermore, the economic impact of recreational boating in the United States in the year 2018 was US$ 170.3 Million which supports about 691,149 jobs and 35,280 businesses. The demand for recreational boating has directly impacted the demand for more such marine vessels. For instance, according to the report by NMMA about 141 Million people go boating each year. The market is further fuelled by the expansion in the business done by marine transportation due to its cost-effectiveness. For instance, according to data published by the International Chamber of Shipping (UK), approximately 90% of the global volume of merchandise trade is carried out via sea, as this channel is cheaper than rail and road transport. The countries in the Asia Pacific are one of the leading providers of manufactured goods due to which the demand for marine containers has increased over the years which has contributed to the increase in the demand for marine winches as well.

The players in the global marine winches market are implementing various growth strategies to gain a competitive advantage over their competitors in this market. Major market players in the market have been covered along with their relative competitive strategies and the report also mentions recent deals and investments of different market players over the last few years. The company profiles section details the business overview, financial performance (public companies) for the past few years, key products and services being offered along with the recent deals and investments of these important players in the market.

Q5. What factors are anticipated to drive the marine winch market growth?
A5. A year-on-year increase in demand for the marine fleet in inland and coastal waterways is expected to boost the demand for marine winches in the near future.