The surgical lights market is projected to grow at a CAGR of 5.75% to reach US$1,086.111 million in 2026 from US$734.793 million in 2019. Surgical light is a medical device used for assisting doctors and surgeons to perform surgical procedures by helping in illuminating the area where surgery is to be performed.

Surgical lights are also known as operating lights or surgical overheads. It is mostly a combination of several lights and accessories. The demand for surgical lights is growing due to an increase in the number of hospitals, growth in the number of surgeries, a growing global aging population, and the rising prevalence of lifestyle diseases. Rising investments in healthcare infrastructure, especially in developing economies. Hospitals are focusing on providing better healthcare facilities and equipping hospitals with the best of devices and technology for improving health care services is boosting the market growth of surgical lights. Supportive government policies and initiatives such as exemptions from taxes and duties for imported medical systems and drugs and subsidized rates for hospital establishments, to improve the country’s health facilities are further contributing to the market growth of surgical lights globally. The increasing standards and regulatory approvals required from the government for operating room equipment are also growing the market for surgical lights as manufacturers are increasingly investing to expand their product portfolio as per regulatory standards across different regions or countries.  Integra LifeSciences introduced a new Codman in April 2019 a specialty surgical product, including Integra Duo, LED surgical headlight.

The growing geriatric population, due to the adoption of a better lifestyle, availability of better health facilities, and declining birth rate, is another factor that is positively impacting the market growth of surgical lights. According to the World Bank Data, the population ages 65 and above of the total population have increased from 7.49% in 2008 to 8.87% in 2018. Since aged people go through a relatively more number of surgeries, this continuous rise in the aging population will increase the demand for surgeries, thereby leading to the market growth of surgical lights during the forecast period.

The market demand for surgical lights is increasing due to the rise in the number of surgical procedures.  Further, the increasing regulatory approvals for the operating room equipped with the aim to offer better patient care across the various healthcare facilities is expected to drive the demand for surgical lights during the forecasted period. The key drivers of the surgical market include a rise in the number of accidents, increasing technological advancement, and the growth in the geriatric population. According to the recent advancement in the market, the LED lights are increasingly used due to their lesser tendency to burn the tissue by the heat generated when used for a longer duration. The rise in the product availability, accessibility of the healthcare facilities, and the high demand for well-equipped operating rooms by healthcare professionals and surgeons especially in the emerging regions are further expected to augment the market of the surgical lights.

The expansion of the advanced healthcare facilities is another key driving factor of the market of the surgical lights. The Healthcare System in the emerging economies is witnessing an influx of private players entering directly or through Public-Private-Partnership (PPPs) which is augmenting demand for the advanced healthcare facilities in these countries. The initiatives adopted by the government of China and India to offer advanced healthcare, increasing investment in the various healthcare institutions, and the subsidies provided to the organizations for the investment in the medical facilities.  Besides, the rise in the number of cardiovascular, dental surgeons, and neurological are increasing the usage of the surgical lights as the advanced led lights have a longer life cycle thus leading to the faster replacement of the lights in the operating rooms 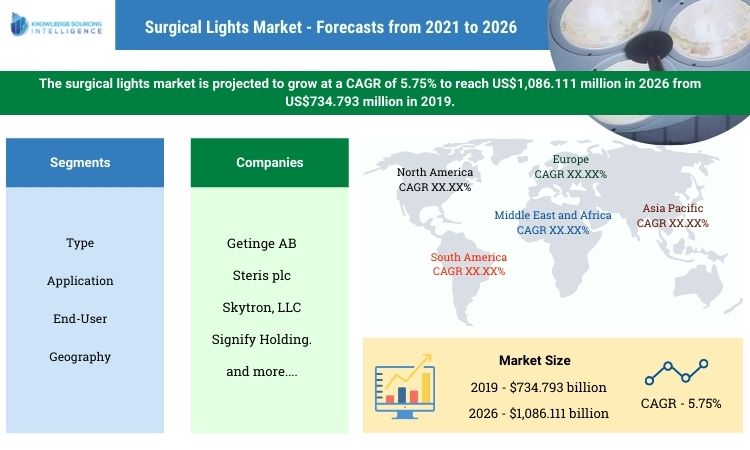 The market of surgical lights on the basis of type is segmented as LED Lights and Halogen Lights. LED is observed to hold a considerable share in the market. LED lights offer long-term cost reduction, quantity and quality of the illumination and the adequate intensity of illumination is leading to increasing preference for the LED in healthcare settings. The increase in demand is motivating the market players to offer advanced products. The introduction of the advanced LED lights has operational benefits over the halogen lights which is proving to be instrumental and is attracting demand by surgeons and other key decision-makers.

While by application the surgical lights market is classified as Cardiac Surgery, Neurosurgery, Oncology, Gynaecological Surgery, ENT Surgery, and Other. Cardiac surgery is estimated to hold a significant share in the market of the surgical lights by application and is expected to continue its dominance during the forecasted period. According to the Centre for Disease Control and Prevention (CDC), heart disease is one of the leading causes of death for both women and men in the USA. One person dies every 37 seconds due to cardiovascular disease and around 647,000 Americans die from heart disease every year.

The surgical lights market by end-users is segmented as Hospital Operating Rooms, Ambulatory Surgical Centers, and Others. Hospital operating rooms are dominating the market of the surgical lights majorly due to the rising investment in building and expanding new hospitals in different regions, exponential growth in the advanced healthcare facilities in the countries including China, UAE, India, and Saudi Arabia. The rapidly developing hospital infrastructure including technologies and medical devices especially during a pandemic is expected to drive the demand for the surgical lights during the forecasted period.  The ambulatory surgical center is expected to witness higher growth during the forecasted period as the patients are preferring their surgery in ambulatory surgical centers than in the hospital to avoid costly hospital bills.

Regionally, the global surgical lights market is classified into North America, South America, Europe, the Middle East and Africa, and the Asia Pacific. North America held a significant market share owing to the presence of well-established healthcare infrastructure, rapid adoption of the technologically advanced LED lights, and rising investments, both public and private, to expand the healthcare infrastructure is bolstering the market growth in this region. It is expected to continue its dominance during the forecasted period. Furthermore, a rapidly increasing aging population in countries like the U.S. and Canada is also driving the market growth of surgical lights in this region. According to the U.S. Population Reference Bureau Report 2016, the number of Americans aged 65 and above is projected to double from 46 million in 2016 to 98 million by 2060.

The growing prevalence of diseases such as cancer is further contributing to the growth of synthetic surgical gloves demand in the U.S. Moreover, rising cases of cardiovascular diseases and cancer in these countries are also contributing to the market growth to some extent. According to the National Cancer Institute (NCI), an estimated 1,735,350 new cases of cancers were to be diagnosed in the U.S., and 609,640 people were estimated to die from the disease. The Asia Pacific region is expected to be the fastest-growing region in the forecast period due to advancing healthcare technology and growing demand for better healthcare facilities in the region. The booming medical tourism industry in South East Asian countries on account of the presence of advanced medical facilities and low-cost treatment is another major driver of the APAC surgical lights market.

The outbreak of the Covid-19 pandemic has impacted every industry including healthcare. The lockdown that followed the pandemic and the change in the priority to the covid-19 patients affected the surgery-associated market for the patients dealing with the severe diseases and the patients going through resultant surgeries. Most of the countries with most cases of the covid-19 transformed their hospital beds to the covid-19 wards. This significantly impacted and reduced the number of dental, gynecological, cardiovascular, and other types of surgeries. However, the government and the healthcare agencies had set downrange to maintain the well-being of all of the healthcare workers and the patients. This negatively impacted the surgery lights market.

Q2. Which region holds the largest market share in the surgical lights market?
A2. North America held a significant share in the surgical lights market owing to the presence of well-established healthcare infrastructure and rising investments, both public and private, to expand the healthcare infrastructure is bolstering the market growth in this region.