Security printing is a division of the printing industry that undertakes the crucial task of printing cheques, banknotes, passports, tickets, identity cards, authentication cards, and others. the prime goal of security printing is to prevent the cases and possibilities of counterfeiting, tampering, and forgery. Hence, the prime factor driving the growth of the market is growing instances of tampering, forgery, and/ or counterfeiting crimes, especially counterfeiting of currency, that severely affects the economy. In May 2019, Yunus Ansari was arrested by the Nepal police on grounds of publishing a fake Indian currency note of value Rs. 2,000. Further, his 3 associates were also arrested and found possessing Rs. 7.5 crore worth of fake Indian Currency, of the same denomination. Such criminal instances surge the demand for secure printing.

The key developer of the market is rising technological advancement along with its adoption of currency printing for better governance and regulation. Printing of fake currencies severely affects the economy, as it increases the quantum of currency in the market, which reduces the international value of that currency, and hence the economy. Further, the circulation of a fake currency increases inflation in the economy, affecting the price of everyday commodities. In India for instance, the National Crime Record Bureau sized twice fake currencies in the year 2017 as compared with the size in 2016. On contrary, the government had demonetized the currency in 2016, intending to reduce corruption, terror funding, fake currencies, and black money. While the fake currency seized in 2016 was 3.55 lakh fake notes, this number almost doubled in 2017 to 7.62 lakh notes, with Gujrat, Delhi, Uttar Pradesh, and West Bengal topping the list, respectively. Pre demonetization, fake Rs 1,000 and Rs 500 currency notes in circulation in the economy. However, post demonetization, fake Rs 2,000 denominated currency notes were seized, but its quantum was far less than that of Rs 1,000 notes.

Hence governments around the world are adopting measures to reduce and eventually remove these fake currencies from the economy. The market is evidencing collaboration and partnership between technological solution providers for a better and secure financial environment, which will boost the market growth opportunities. In October 2018, for instance, the government of Uganda established a local printing factory, in collaboration with Veridos. The government and the company entered into a 15-year partnership to formulate a security solution, providing the citizen with secure documents. The firm also entered an agreement with the European Investment Bank, in November 2018, for providing security printing of new ID cards and passport production for the citizens of Greece. The governments of Nepal and France have collaborated to establish a state-of-art infrastructure for security printing facility in Nepal, enabling the country to print its government materials, currency, passports, and others. 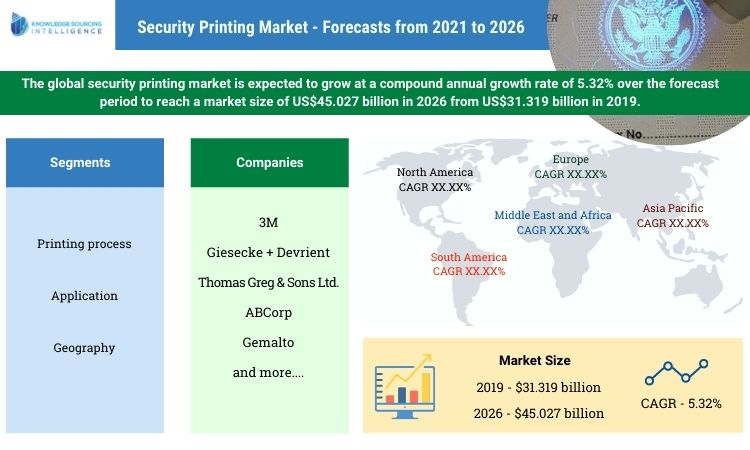 Moreover, companies are investing in the research and development of securer technology for prime security. Governments are also backing and adopting these advancements to reduce economic loss due to counterfeiting and tampering. The employment of hybrid printing papers and technology in the printing of currency is expected to reduce money laundering, counterfeiting of currency, and corruption, hence burgeoning the market. the European Central Bank (ECB) printed new EURO 100 and EURO 200 denominated currency with bold design, satellite hologram, and bold shades to monitor the circulation. Zwipe, a biometric technology company, developed and launched a biometric payment card to be used in Banks in brazil. The company collaborated with Thomas Sons & Greg do Brazil to undertake this development. Also, to decrease and nullify the spread of fake currency, the Indian government employed special ink that helps in cracking down fake currency and passports. The Nepal government imported a security printing press in early March 2021, which was worth Rs. 800 million, to print postal stamps, academic credentials, and excise duty stickers.

Brand Protection and tickets will have a noteworthy share of the market.

Based on the application, the security printing market is segmented into Financials, tickets, brand protection, personal ID, and others. the financial segment is anticipated to dominate the market during the forecasted period, owing to the severe effect of counterfeiting, tampering, and forgery on the economy. However, it is predicted that tickets and brand protection will have a noteworthy share and grow at a significant rate during the forecasted period. The prime reason for increasing the adaption of security printing in the brand protection segment is due to surging pirated products, on both offline and online channels, along with its drastic effect on the brand name and company’s operations. The Loreal’s counterfeiting case of 2018 was declared exemplary by Supreme People’s Court in 2020.

The company observed an online platform, Taobao selling its counterfeited products which were misguiding and harmful for customers. A thorough investigation was undertaken by the Shanghai Public Security Bureau, which discovered 13 suspects, 16 targets, and 22,600 bottles of fake product with Loreal label, costing worth Rmb 4.6 million. Post this case, the company strengthened its security printing technology to distinguish its product from the pirated and fake ones.

The Asia Pacific region is forecasted to have a notable market share during the forecasted period.

Based on geography, the market for security printing is segmented into North America, South America, Europe, the Middle East and Africa, and the Asia Pacific regions. The North American region is anticipated to hold a significant share of the market surging scrutiny and investment in combating counterfeiting currency and documentation, along with tightening laws. The European region is also estimated to grow at a significant rate, owing to an increase in migration, the financial crisis in some countries, and the adoption of advanced technology to fight money laundering, fake currency, and corruption.

However, the Asia Pacific region is estimated to hold a noteworthy share of the market and grow at an exponential speed with the adoption of advanced technology in countries like India, China, and Nepal. Moreover, rising concerns over corruption, terror funding, and fake currency will surge the market in the area. Moreover increasing digitalization and use of modern methods of banking, such as the adoption of credit/debit cards will further boost the market.

Q3. What is the size of the global security printing market?
A3. The Security Printing market was valued at US$31.319 billion in 2019.