The agricultural biologicals market is expected to grow at a compound annual growth rate of 11.02% over the analyzed period to reach a market size of US$19,699.792 million in 2026 from US$9,477.038 million in 2019. Agricultural biologicals are a distinctive group of natural products, derived from naturally occurring micro-organisms, beneficial insects, plant extracts, and other organic matters.

Biological products, such as agricultural biologicals, are the fastest-growing segments in the agricultural input market. the key developer of this industry is the growing demand for eco-friendly, chemical-free products for better yield. Chemical fertilizers and pesticides do increase yield, at the cost of the quality of the crop. The chemicals may end in the end product, harming the health of the consumers. Agricultural Biologicals, on the other hand, do not contain chemicals and make the plant and yield more nutritious and healthier. Bio-stimulants helps in increasing plant metabolic and enzymatic process, thus improving the production level and the crop quality. Bio-pesticides protects the plant from incest and other microbes attack, saving the yield.

The market growth is driven by many factors which include R&D and innovation to meet the growing food demand as a result of the surging global population. Further, consumer interest in organic products will also drive the market. Furthermore, insects and weed resistance towards chemicals used in agriculture accompanied with rising environmental concerns will have a positive impact on the agricultural biologicals market.

Rapid Urbanization and Industrialization, along with growing disposable income will have a positive impact on the market, driving the demand further.

The prime driver of growth in the agricultural biologicals market is anticipated to be the growing demand for food owing to booming population growth. The World population is expected to increase to 9.8 billion by end of 2050, from 7.8 billion in 2019. This growth will increase the demand for food products. Further, rapid industrialization and urbanization, especially in developing countries, will decrease the arable land available for cultivation. Hence, intense pressure will be on agricultural lands to increase yield. Farmers will turn towards agricultural biologicals which helps in increasing yield. Moreover, growing disposable income will also boost the market. growth in disposable income redefines a better standard of living. Along with this, consumers are becoming more health-conscious and are demanding natural, organic products. To meet this demand, farmers are employing bio-products. These factors combined will boost the market for agricultural biologicals.

Major hindrances faced by the agricultural biologicals market are its low shelf life and lack of awareness.

Agricultural biologicals are plant-based or bio-based with minimum or no involvement of chemicals. In repercussion, biologicals product has a lower shelf life, i.e., same cannot be used for a longer period. Hence, it cannot be stocked and stored by farmers. Moreover, these products are less adaptive and cannot be transferred easily from one container to another. Lack of awareness of these products s another constraint facing the market. 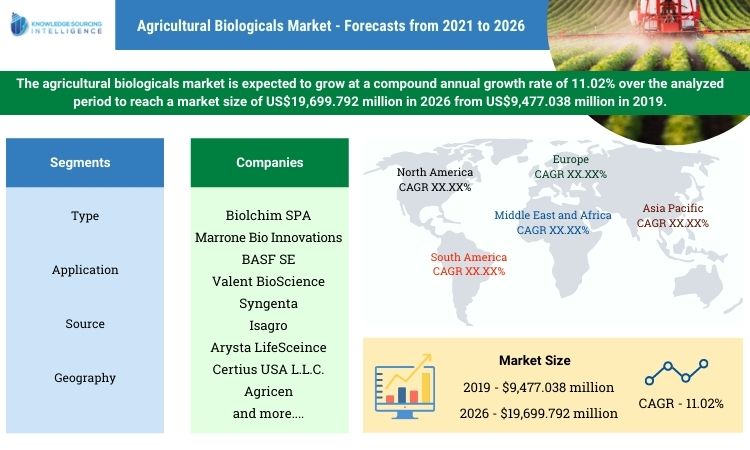 Based on the source of agricultural biologicals, the market is classified into biochemicals, microbials, and others.

The Asia Pacific region is anticipated to grow at the fastest pace.

Based on geography, the market is segmented into North America, South America, Europe, the Middle East and Africa, and the Asia Pacific regions. The Asia Pacific region is predicted to grow at the fastest rate during the forecasted period, owing to rapid urbanization and growing industrialization. The region will also encounter a population boom in the coming years, especially India and China, which will become the first and second most populated countries, respectively. Moreover, growing disposable income in the area and raised standard of living have increased the demand for natural products. Surging health concerns has also significantly influenced the demand for organic products. The governments, as well, are supporting the use of agricultural biologicals for sustainability and health. The government of India, for instance, made it compulsory for farmers, in August 2020, to purchase a bag of bio-fertilizers with every bag purchase of urea. The government intends to promote the use of bio-fertilizers, along with discouraging the use of chemical fertilizers, with this regulation.

The North American region is also estimated to employ a noteworthy market share, owning to their state-of-art infrastructure. Education and awareness also play a significant role in the promotion of agricultural biologicals in the region.

The coronavirus pandemic had a positive impact on the Agricultural Biologicals industry. The pandemic forced the governments to scrutinize their policies and employ sustainable means to reduce human carbon footprint. Further, raised safety and security standards have encouraged the consumption of healthy, natural, and organic products for better immunity and health.

Q4. Which region holds the maximum market share in the agricultural biologicals market?
A4. The Asia Pacific region is anticipated to dominate the data center colocation market owing to mushrooming small and medium enterprises along with growing technology adoption.

8.5. The Middle East and Africa