Global Agrochemicals Market Size, Share, Opportunities, COVID 19 Impact, And Trends By Type (Fertilizers, Pesticides), By Crop Types (Oilseeds, Cereals, Fruits And Vegetables, Others), And By Geography - Forecasts From 2021 To 2026

Agrochemicals refer to the chemicals such as pesticides and fertilizers that aid in crop cultivation to meet the global food demand. They provide crops from various organisms which can potentially damage or slow the growth of the crops. The growing global population and the steady reduction in arable land are anticipated to drive the agrochemicals market in the coming years. Furthermore, there is a relative improvement in the farm income over the years along with the favorable agriculture policies by the governments of countries all over the world. This, in turn, is further propelling the business growth opportunities for the market players over the forecast period. Also, the growing focus on bio-based agrochemicals is anticipated to offer multiple new opportunities for the market players to expand their footprints in the market, thus further leading to bolster the agrochemicals market growth in the coming years.

The recent outbreak of the novel coronavirus disease affected the agrochemical industry negatively. The lockdown and trade restrictions led to losses in the agrochemicals market. In China, which is the most prominent producer and consumer of phosphates, sulfur, and sulfuric acid, the agrochemicals industry was badly affected. Due to production constraints in China due to Covid-19 guidelines, the supply of chemicals such as phosphates became tighter, leading to a negative effect on various countries like India and Brazil. But after the lifting of lockdown and the ease of trade and production, the industry has been recovering and is anticipated to come to its normal flow from the years 2021 onwards. 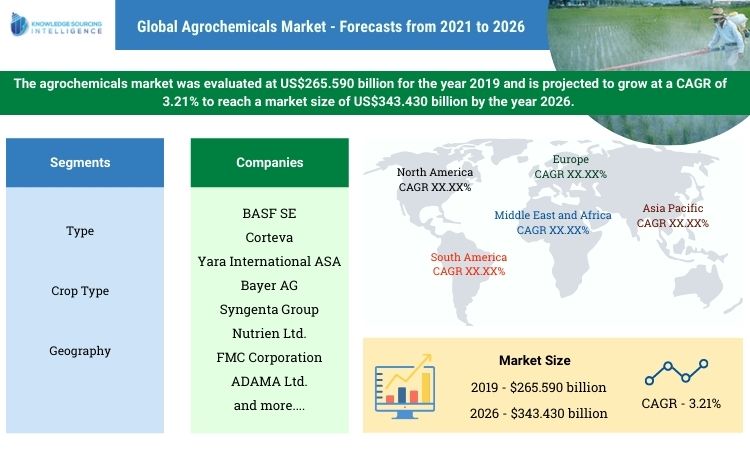 Growing population coupled with a reduction in arable land

One of the key factors supplementing the Agrochemicals market growth includes the growing population across the globe. Agricultural production is increasing globally to meet the rising food demand of the growing population. It is anticipated that the global population will increase to 8.6 billion by 2030 (Source: The World Population Prospects, United Nation) which will further drive the agriculture production activity. Simultaneously, the global trend of urbanization is steadily reducing the arable land available for cultivation. It is projected that the arable land in the European Union will fall from 106.5 million hectares in 2017 to 104 million hectares in 2030 (Source: EU Agriculture Outlook, European Commission). As a result, the use of fertilizers in agriculture has increased rapidly because of their ability to significantly improve crop yield. This is indicated by the fact that fertilizer consumption as a percentage of fertilizer production has increased from 89.307% in 2013 to 94.013% in 2015 (Source: World Bank). These factors are having a positive impact on the growth of the agrochemicals market and are expected to play a major role in bolstering the market growth in the coming years.

Support provided by governments of various countries for agrochemicals

The Ministry of Chemicals and Fertilizers, Government of India, announced in November 2020 that the government is going to launch a production linked incentive (PLI) scheme which will aid the domestic production of agrochemicals. According to an article published by International Fund for Agricultural Development, United Nations, the governments in Africa spend a huge amount on fertilizer subsidy programs accounting for over US$1 billion per year. It also stated that 30% of all the government expenditure in the agricultural sector comprises fertilizer subsidies in the ten nations that represent most of the fertilizer spending. The Government of India in July 2019 increased the fertilizers subsidies given to farmers by 14% to around Rs 800 billion from the previous year. The government also stated that the fertilizer subsidies in the budget have been expanded by around Rs 100 billion. This increase in the agrochemicals subsidies and the support from governments is impacting the agrochemicals market positively and is anticipated to propel the market growth during the forecast period.

Geographically, the North American region is anticipated to hold a significant market share in the agrochemicals market owing to the increasing expenditure on agricultural activities and the rising use of herbicides in the region. Also, agriculture has been an important part of the North American countries such as the United States economy. As per the USDA ERS, the food, agriculture and related industries contributed more than US$990 billion to the U.S. GDP in 2015, a 5.5% share of the country’s GDP. The Asia Pacific region is anticipated to witness substantial growth due to the rising population in the region which is driving the demand for food products. This, in turn, is boosting the demand for agrochemicals to increase the yield per hectare while protecting the food products during the crop lifecycle.

Prominent/major key market players in the agrochemicals market include BASF SE, The Dow Chemical Company, Yara International ASA, among others. These are implementing various growth strategies to gain a competitive advantage.

The company profiles section details the business overview, financial performance (public companies) for the past few years, key products and services being offered along with the recent deals and investments of these important players in the Agrochemicals market.