The Agriculture Inoculant market is expected to grow at a compound annual growth rate of 6.58% over the analyzed period to reach a market size of US$1,365.856 million in 2026 from US$874.329 million in 2019. Inoculants refer to weak disease agents that are introduced in the body of the host, to build immunity against that disease-causing agent. The agricultural inoculants which contain Rhizobium bacteria are known as nitrogen inoculants. Since these bacteria are not naturally mobile in the soil, it is crucial to add the required amount of Rhizobium to ensure successful nodulation. These also convert atmospheric nitrogen into a form that can be consumed by plants.  Further, there is a different strain of Rhizobium for different plants, which cannot be used interchangeably. With the growing world population, which is soon to reach 9 billion by end of 2050, food availability will become a major concern. Further, with decreasing arable land and urbanization, it has become crucial to increase yields along with conserving the plant. Agriculture Inoculant methods provide required nutrition to the plants. It also stimulates hormonal production in plants leading to plant growth.

Legumes to hold a significant share in the market.

Legumes such as pulses, peas, chick-peas, peanuts, lentils, and beans are predicted to have a significant market share of the agriculture inoculant market. This is because an inoculant may not be effective in more than one plant. For instance, the Rhizobium stain’s success rate differs from the different plant types it is paired with. A stain that succeeds in the production of nodules in lentils and peas, may fail when paired with beans. Pulses, in particular, require a high amount of nitrogen to become protein-rich post-production.

Cereals and other crop plants will also have a noteworthy share in the market. Fungal-based inoculants are more effective in other crops with superior yield. Groundwork BioAg Ltd. along with Advanced Yield LLC announced the production of record-breaking corn yield, in 2020, using former’s ROOTELLA X Mycorrhizal fungal inoculant. Advanced Yield LLC had been treating their 8,000 acres farms with ROOTELLA X technology.

Seed Inoculation to dominate the market. 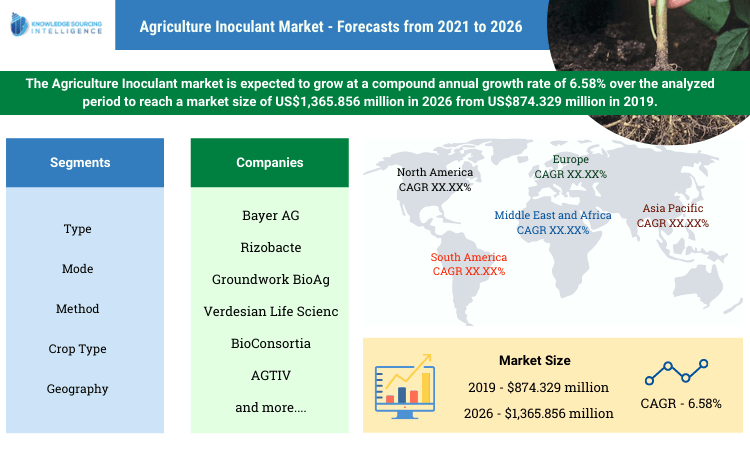 The Agriculture Inoculant market has been further regionally classified as American market, European, Middle East, and African market, and Asian market. The North American and Asia countries have huge potential and are anticipated to grow at an exponential rate in the agriculture inoculant market. Especially countries such as India, China, Canada, Mexico, the U.S. have a prominent role to play.

The North American region, given its state-of-art infrastructure and technology advanced agriculture sector, will have an unconstraint growth, while lack of awareness, education, and initial investment may be hurdling the agriculture inoculant market in Asian countries of India and Vietnam.

The coronavirus pandemic might have shaken the supply of agriculture inoculants owing to lockdowns and disturbing channels. However, with rising awareness, the market is expected to face a demand boom in the next couple of years. Also, rising internet penetration, agriculture technology, and government support will further drive up the market.

November 2020, venture: Groundwork BioAg partnered with U.S.’s Left Coast Wholesale to sell its DYNOMYCO mycorrhizal inoculant. The product is based on 30 years of research by Israel’s Volcani Center and is formulated to increase the yield of cannabis along with the cannabinoid levels. The U.S. legalized the use of cannabinoids for therapy and reconstruction in its Farm Bill of 2018.