The fluorochemicals market is estimated to grow at a CAGR of 3.34% to reach US$27.440 billion in 2026 from US$21.800 billion in 2019. Fluorochemicals are fluorine derivatives that are increasingly being deployed across different industries in applications like blowing agents, freezers, air conditioners, fire extinguishers, and other electrical devices. Fluorochemicals are defined as any inorganic and organic compound that contains one or more fluorine atoms that repel oil and water thus exhibiting resistance against aggressive physical and chemical conditions in industrial processing.

The market drivers of the fluorochemicals market include an increase in the consumption of frozen and packaged food, a surge in the demand from the commercial refrigeration industry and automobiles. The commercial refrigeration industry is witnessing growth globally, especially in developing economies such as India, Africa, China, and Brazil on account of the rise in disposable income. Additionally, the rise in the application of fluoropolymers in emerging applications such as solar & photovoltaic and water filtration is anticipated to drive the market growth of fluorochemicals. The expansion in the consumption of frozen and packaged food is leading to a rise in the market demand for the commercial cooling system is likely to positively impact the market of fluorochemicals.

Fluor technology products are witnessing the expansion in the application in the construction and building industries to include the materials such as wire and cable with anti-corrosion, UV resistance properties, and architectural membranes and coatings.  The growth in the automotive industry with the rising demand for lightweight vehicles, hydrogen fuel cells, and electric is expected to drive the fluorochemical market during the forecasted period. Further, some of the market players are focusing on sustainable solutions to solve environmental concerns. For instance, Chemours formed a strategic partnership with UET in April 2019 to address the renewable energy storage challenge. The smart grid development and energy storage requirements are leading to the increasing use of fluoropolymers in renewable energy generation and storage applications. 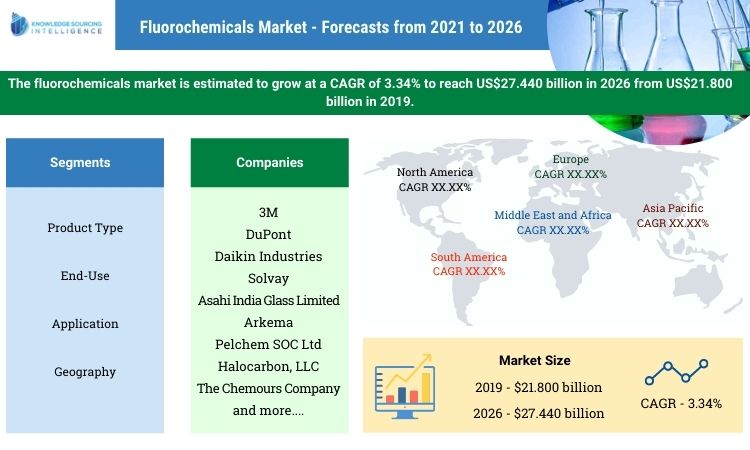 The market of fluorochemicals by end-user is classified as Electrical & Electronics, Chemicals, Automotive & Transportation, Pharmaceuticals, Electrical and Electronics, Aerospace and Others.

The fluorochemicals by region are classified as North America, South America, Europe, the Middle East and Africa, and the Asia Pacific. Asia Pacific region is expected to show remarkable growth, be the largest and fastest-growing market over the forecasted period due to the less regulatory pressure, fast economic growth, and increasing application of refrigerants in the HVAC system, infrastructure, and automotive.  Further, the rise in the consumption of frozen and packaged food has been witnessed in the region which is leading to an increase in the demand for the commercial cooling system which is likely to boost the market growth of fluorochemicals.  The abundance of aluminum reserves in the countries such as China and India and also the regulatory inclination to promote the FDI in the domestic metal sector are further expected to expand the application of fluorochemicals in the Asia Pacific region.  Rapid industrialization in developing countries such as China, India, and Southeast Asian countries is likely to augment the market demand for refrigerants during the forecasted period.

The outbreak of Covid-19 has affected every industry. The demand for essential medical equipment was increased during the pandemic which positively impacted the fluorochemicals. However, the lockdown affected the distribution channel. The manufacturers of fluorochemicals are currently focusing on reducing the gap between demand and supply which aids the medical device firms to ensure sustained production. Due to these factors, the market of fluorochemicals is projected to remain strong during the pandemic crisis.