The ability to control the environment enables farmers to grow crops and produce throughout the year. Growing crops in the safe environment of a greenhouse help in improving the genetics of the plant, which leads to the growth of a healthy variety of produce. Commercial greenhouses range from large farms to neighborhood nurseries. These provide a variety of features providing controlled conditions optimum for the growth of plants according to the need or requirement. Rapid urbanization and less availability of arable land, increasing demand for food due to the growing population, and climate change, which affects the yield of crops are the major drivers driving the growth of the commercial greenhouse market. In addition, the changing climatic conditions during traditional farming have led to the adoption of commercial greenhouses, which is further fueling market growth.

The commercial greenhouse market has several advantages such as the even distribution of light in the greenhouse facility, optimizing heat, and control of microclimate, protection against diseases, excellent ventilation, and protection from rain, production in regions with adverse weather conditions, and ability to produce crops even during the off-season.

Based on region-wise segmentation, North America and South America regional markets are projected to grow on account of the rising number of low-tech and medium-tech greenhouses in these regions supported by the adoption of modern farming practices. In Europe, greenhouse cultivation is the most preferred form of cultivating crops owing to harsh climatic conditions. The demand for commercial greenhouses in the Asia Pacific region is projected to witness a rise owing to the growing focus towards improvements in the agricultural sector by the governments and multiple institutions.

The booming trend of rooftop farming and the rapidly increasing population are two major drivers for the market. Based on type, the gutter-connected commercial greenhouses account for the significant market share owing to their cost-effectiveness and their ability to be installed on a small piece of land without compromising on crop productivity. By component, High tech commercial greenhouses hold the dominant share in the market and are expected to be the fastest-growing segment owing to their increasing adoption in developed economies.

By Application, owing to the advantage of growing plants regardless of climatic condition and yearly demand for fruits and vegetables this segment holds a significant share in this market. Also, growing competition in this industry is pushing the market players towards adopting new technologies while also focusing on cost reduction. In addition, cultivation in greenhouses requires less labor and is aiding in the inclination towards the increasing adoption of greenhouses across the world. 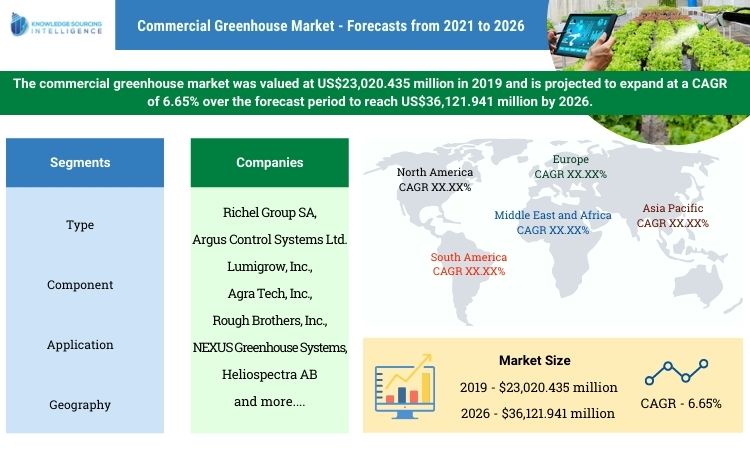 The Commercial Greenhouse Market is segmented on the basis of Type, Component, Mode of Application, and Geography.

The implementation of greenhouse farming provides much more control over the environment where crops grow. The producers can manage the temperature, irrigation process, air humidity, and light efficiently; which results in giving them a good yield. By exercising control over the growth of crops, farmers keep them healthier and are able to predict the amount they are going to harvest. Owing to the multiple benefits of the commercial greenhouses, the amount of yield produced using these greenhouses is much more than the ones produced traditionally. This benefits the producer as the yield produced is more in quantity and the quality is better.

For the crops to grow properly in commercial greenhouses, precise environmental conditions are required. It is essential to monitor optimum air quality, temperature, and relative humidity. Such crops need optimum light and water quality to grow. The nutrition levels should be constantly managed and adjusted to the suitable level as per the need and growth stage of each crop.

The monitoring and accuracy of the natural resources and nutrients are the keys to producing greenhouse crops. The initial cost of setting up a commercial greenhouse is very high as there is a requirement for the proper design of the watering systems and supplemental lighting. Thus, setting up these systems involve huge costs, which are difficult for a traditional framer to afford. This could cause a major hindrance to the growth of the commercial greenhouse market, especially in developing regions.

The novel coronavirus pandemic has negatively impacted the overall supply chain in agriculture, and, in turn, the commercial greenhouse market as due to the nationwide lockdown all the operations across the globe were put to a halt. The supply-chain disruptions have resulted in many producers using the greenhouse process to struggle to transport their producers to the markets.

The demand for fresh food has increased but the producers are finding it difficult to meet the increasing demand. In addition, the government of several countries has restricted and delayed imports and exports which has further impacted the producers. Thus, the pandemic has resulted in a major drawback for the producers, as the supply chain is not well equipped to cater to the increasing needs of the customers.

The players in the Commercial Greenhouse Market are implementing various growth strategies to gain a competitive advantage over their competitors in this market. For Instance, Heliospectra AB, in April 2021, has announced the launch of heliCORE 2.O, heliCORE 2.O enabled growers are likely to have unprecedented control over light intensity, spectrum, and photoperiod. In addition, LumiGrow, a smart horticultural lighting company, announced the successful completion of a $5.1 million bridge financing in 2018. Major market players in the market have been covered along with their relative competitive strategies in this report and the report mentions recent deals and investments of different market players over the last few years.

The company profiles section details the business overview, financial performance (public companies) for the past few years, key products and services being offered along with the recent deals and investments of these important players in the Commercial Greenhouse Market.

Q2. What is the size of the global commercial greenhouse market?
A2. Commercial Greenhouse Market was valued at US$23,020.435 million in 2019.

Q5. Which region holds the largest market share in the global commercial greenhouse market?
A5. North America and South America regional markets are projected to grow on account of the rising number of low-tech and medium-tech greenhouses in these regions supported by the adoption of modern farming practices.