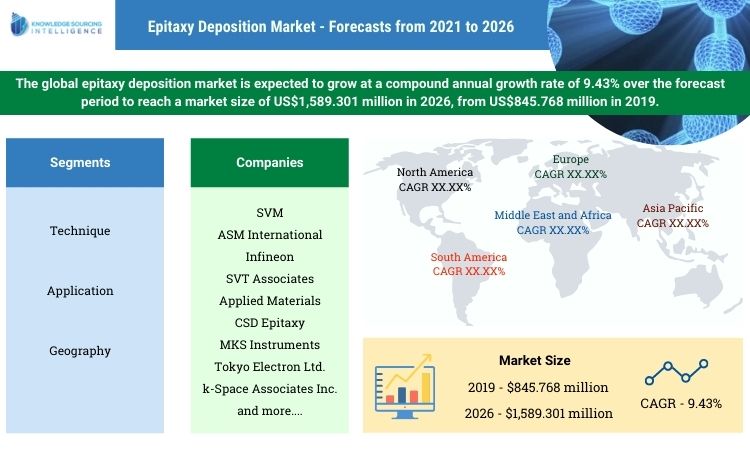 Growth of semiconductor and wafer production

The market is expected to surge in the coming years, because of the rise in semiconductor and wafer production, worldwide. According to the data given by the Semiconductor Industry Association, global semiconductor sales had increased from US$125.6 billion, in the year 1998 to approx. US$412.2 billion in the year 2019, with a CAGR of around 6.5%. The United States-based companies have the largest and biggest market of approx. 45%. The United States companies have been maintaining a major position in the design, process technology, and research and development. Taiwan is one of the biggest producers of semiconductors, globally. Due to the country’s strong and powerful capabilities in OEM wafer production and a robust and complete industrial supply chain, the country has been able to separate itself from some of its major competitors. Taiwan Semiconductor Manufacturing Company accounts for a major share in production, worldwide. China is also making significant developments in the market. The country has been increasing and accelerating its efforts to advance and enhance its semiconductor industry, in the past few years. The country has also acquired and enhanced its capability to produce and manufacture 28-nanometer chip wafers. This development illustrates China’s increasing advancement in the development of novel, complex and high-end skills in chip and wafer manufacturing. In the year 2020, China had announced that it would invest around US$1.4 trillion, over the next six years, to develop and enhance its semiconductor industry. India is also expected to make significant developments in the market, in the coming years. The government in the country had approved an initiative and scheme for the promotion of manufacturing of Electronic components and semiconductors for major and critical sectors. The government of India had also come up with the National Policy of Electronics in the year 2019, to facilitate the development of Semiconductor FAB facilities for the designing and fabrication of chips and their components in the country. These developments are expected to have a positive impact on the market, during the forecast period. Major companies have been using the epitaxy deposition method for the production of wafer chips, in the past few years. For instance, SVM, one of the key players in the market, supplies and provides custom epitaxial wafer services and solutions on silicon wafers for R&D or major scale production. The company processes single-crystalline EPI layers on the respective wafer diameters from 76mm to 200mm. These trends are expected to have positive developments on the market, during the forecast period.

Major firms, globally, have been making significant developments in the market, in the past few years. AIXaTech GmbH has been developing and manufacturing epitaxy systems and solutions for wide bandgap semiconductor solutions and materials. The company has also been producing novel epitaxy systems for the production of high electron mobility transistors, light-emitting diodes, transparent actuators, and bulk acoustic wave filters. Other players are also making significant developments in the market. For instance, in November 2020, Vigo Systems, a partner of Boston Electronics announced that it had established a novel Epitaxy Division, intending to provide the electronics industry with foundry production of novel III-V com-pound semiconductor epitaxial structures for microelectronic and photonic applications. Some of the epitaxial structures produced by the company are Quantum cascade laser diodes, for applications such as security, remote sensing, industrial process control, and others. The company also provides epitaxial solutions for vertical-cavity surface-emitting lasers, that are used in communications. With the increasing investment, the market has been surging at an exponential rate. Siltronic AG, one of the key players in the market, had announced that it had strengthened its GaN on the company’s silicon wafer activities with a novel AIX G5+C deposition system, provided by Aixtron SE. Siltronic also stated that it would use and operate an extra additional epitaxy reactor for the manufacturing of 150 mm and 200 mm GaN-on-Si epi wafer for power and RF applications. These trends are expected to have a positive impact on the market during the forecast period.

Q3. What is the size of global epitaxy deposition market?
A3. Epitaxy Deposition Market was valued at US$845.768 million in 2019.