The global marine engines market is evaluated at US$10.717 billion for the year 2020 growing at a CAGR of 3.43% reaching the market size of US$13.121 billion by the year 2026. A Marine Engine is a petrol or diesel engine that is specifically designed to be used in the marine environment. The key difference between a regular automobile engine and a marine engine is that the marine engine is modified according to the marine environment in terms of safety, performance, and other regulatory requirements. The process of modifying an engine for marine usage is called ‘marinisation’. The type of engine used for marine applications are the internal combustion engines wherein the combustion of the fuel takes place inside the cylinder and the heat is generated after the combustion process. The market for marine engines is driven by the rapid developments in the shipbuilding business across the world as the manufacturing of commercial boats has also witnessed a significant increase. For instance, according to the International Boat Industry, the United States reported second highest boat sales in September of 2020, in the last 10 years. The increase in the demand of boats and other marine vessels is expected to be a catalyst to the market of marine engines. Moreover, according to a 2019 report by the National Marine Manufacturers Association (NMMA), the sales of the boats and other marine products in the United States were estimated to reach US$ 42 Billion in 2019.

According to the report by NMMA, the retail unit of sales of powerboats has increased significantly over the years with standing at 280,000 in the year 2019 which was the second highest since 2007. Furthermore, the economic impact of recreational boating in the United States in the year 2018 was US$ 170.3 Billion which supports about 691,149 jobs and 35,280 businesses. The demand for recreational boating has directly impacted the demand for more such marine vessels. For instance, according to the report by NMMA about 141 Million people go for boating each year. The market is further fuelled by the expansion in the business done by marine transportation due to its cost effectiveness. For instance, according to data published by the International Chamber of Shipping (UK), approximately 90% of the global volume of merchandise trade is carried out via sea, as this channel is cheaper than rail and road transport. The countries in the Asia Pacific are one of the leading providers of manufactured good due to which the demand for marine containers has increased over the years which has contributed to the increase in the demand of marine engines as well. The increasing demand for more efficient, faster and environment friendly engines will drive the market for marine engines during the forecast period. For instance, according to a report by the International Maritime Organization (IMO), the organization has drafted a new rule under which the Sulphur content in the marine fuel is required to be decreased to 0.5% from 3.5%. The new rule will consequently cut down the emissions from ships by about 77%, which has further increased the demand for the electrification of marine vessels. 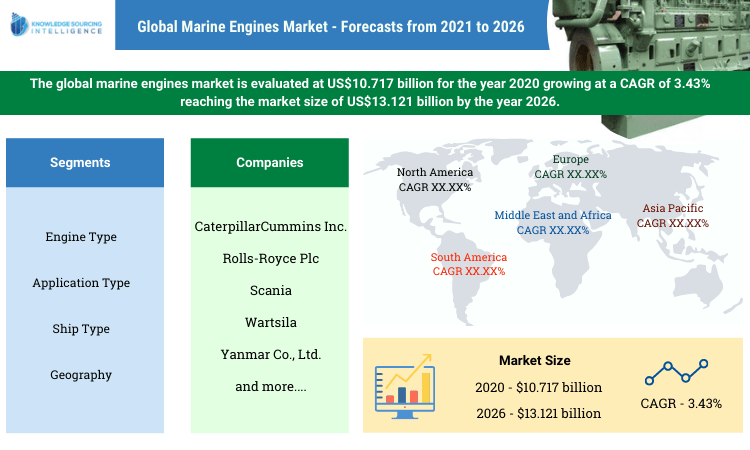 The advent of COVID-19 had an adverse impact on the global marine engines market since the pandemic brought the activities in boats and ship industry to a standstill globally which restricted the transportation of goods through marine containers and also the owners of boats to take their marine vessel into the waters. After the initial lockdown period, boating came back but with restrictions and certain protocols that were required to be followed like the ship will be operated with lesser capacity which will require less labour to come in contact and social distancing was required to be maintained at the fuel dock as well. Moreover, the sales of commercial and personal boats dipped during the initial months of the year owing to the lockdown which led to the shutting down of the sellers for a certain period initially. With the industries recovering after the pandemic gradually, the shipbuilding business is expected to operate in the full capacity starting from the third and fourth quarters of 2020.

The growth of the Marine Engines market is fuelled by a significant increase in the shipbuilding business due to the increase in the demand for commercial powerboats as well as the of ships and other marine vessels used for transportation across the waters. For instance, the boats and ships business in Hawaii has an annual economic impact of about US$ 401 Million which includes manufacturers and suppliers, sales and services, boating activities, and business tax revenue. Moreover, the sales of new boats, engines and other marine accessories is about US$ 29 Million. The growing business across several countries will fuel the market for powerboat batteries in the coming years.

Furthermore, the shipbuilding business is expected to witness a significant increase owing to the rapid investments made in the sector. For instance, according to an article published in Defense News of the United States, the Chinese Communist party has invested more than US$ 130 billion in the shipping industry and other shipping subsidiaries over the period of 2010-2018. Furthermore, according to a blog by the Eno Center for Transportation, several countries are now developing their shipbuilding industry with South Korea building up to 37% of the global ship construction, Japan making 27% and China making up to 21%.

The global market for Marine Engines is expected to be driven with the increasing demand for dual engines in the sector. This factor is acknowledged by many companies like an opportunity to drive the business further. An engine being one of the most important component of a ship or a boat, the manufacturers of marine engines are driven to provide more efficient, cleaner and a faster engine at a lower cost. With the introduction of dual fuel engines, the market has scope for more innovation during the coming years which is further expected to drive the market.

The players in the global Marine Engines market are implementing various growth strategies to gain a competitive advantage over their competitors in this market. Major market players in the market have been covered along with their relative competitive strategies and the report also mentions recent deals and investments of different market players over the last few years. The company profiles section details the business overview, financial performance (public companies) for the past few years, key products and services being offered along with the recent deals and investments of these important players in the market.