The global self-healing grid market is projected to grow at a CAGR of 27.52% to reach US$8.834 billion by 2025 from US$2.054 billion in 2019. The increasing requirement for automation and smart solutions and technologies is due to the improving industry standards and the rising concerns among the industry players in order to reduce overall costs.

The industry standards are improving, the product and solution requirement by the different industries is also rising and is encouraging the companies to provide automated solutions with recent technologies so as to deal with the problems effectively. The power distribution grid, which is responsible for the management of power and controlling the distribution and transmission of power is also facing different challenges as the infrastructure is getting older.

Moreover, there are rising concerns among the power grid companies and owners to adopt eco-friendly, energy-saving, and cost-saving automation solutions so as to minimize the burden of maintenance and labor costs. Also, as there are other power sources being integrated into the distribution and power grid systems such as thermal power, solar power among others, the end-users are struggling to adhere to the industry standards and regulations and adopt self-healing solutions. Therefore, these factors are causing the market growth to propel over the forecast period.

The unavailability of required infrastructure and the supported technologies coupled with the lack of skilled workforce required for the maintenance and operations in the low-income regions.

The self-healing grids are also considered as one of the additional features and advancements which is used to enhance the functionality of the smart grid solutions that are being deployed in different counties globally, so as to make the related process more efficient. However, the deployment of self-healing technology or self-healing grids rakes up a high initial investment and also requires skilled labor for the maintenance of the various features. This is not possible in many of the low-income counties and regions, as there is the unavailability of the required infrastructure and a lack of a skilled workforce. Hence, this factor poses a restraint in the self-healing market growth over the forecast period. 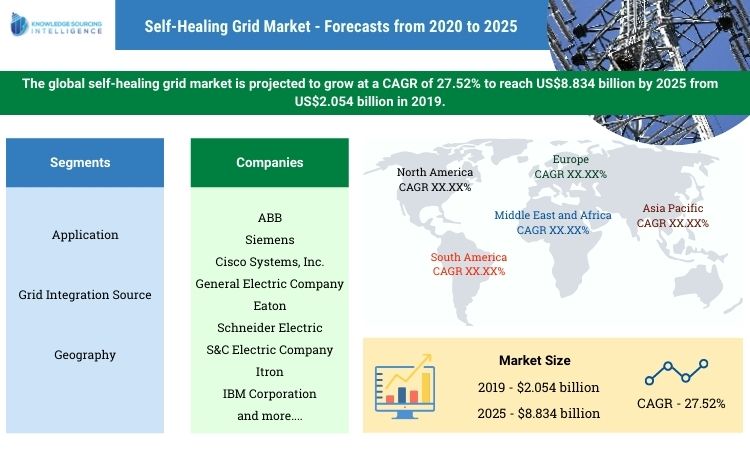 The market players are highly active in the market by offering and making available a variety of smart grid and power distribution self-healing solutions with enhanced and advanced features in order to cater to the rising demands from different end-users.

Some of the examples of product launches and offerings are as follows:

The North American region is estimated to hold a notable share over the forecast period owing to the faster adoption by the power grid owners as the transmission and distribution losses are increasing. On the other hand, the Asia Pacific region is poised to show modest growth due to efforts being made by the government of counties such as India to adopt smart grids and self-healing grid solutions

The North American region is estimated to hold a considerable market share throughout the forecast period owing to the fact that the adoption of such systems is growing faster in the different states of countries such as the US. This is due to the fact that the power losses in the transmission and the distribution of electricity via the power grid are estimated to be around 5%, according to the data and statistics provided by the U.S. Energy Information Administration. Moreover, there are rising investments being made by the market players in order to provide advanced and more enhanced solutions to make the management of distribution grids automated and more efficient.

On the other hand, the Asia Pacific region shows the potential to grow at a notable pace over the forecast period. This is attributed fact that the government of countries such as India is increasingly involved in order to improve the distribution sector in the country by launching programs such as the National Smart Grid Mission, which has been undertaken by the Ministry of Power.

Q4. Which region holds the largest market share in the self-healing grid market?
A4. The North American region is estimated to hold a notable share over the forecast period owing to the faster adoption by the power grid owners as the transmission and distribution losses are increasing.