The smart grid market is estimated to attain a market size of US$92.107 billion in 2026 from US$29.336 billion in 2019, growing at a CAGR of 17.76%. The smart grid is an electricity supply network that uses digital communications technology to detect, react to local changes in usage and enable the self-healing of the network automatically after the disturbance of the power.

Smart grid provides efficient and reliable power supply through various smart grid applications and technologies, thus offering the opportunity for the economy and the environment. Due to the increase in the deployment of smart grid technologies across the globe, the advanced metering infrastructure is expected to witness significant growth during the forecasted period. The governments of both underdeveloped and emerging countries are recognizing smart grid technology as the strategic infrastructural investment which will aid in their long-term economic prosperity and thus will help them achieve the carbon emission targets.  These factors are expected to boost the market growth and provide opportunities to the smart grid companies in the forecasted period.

The smart grid market is expected to expand due to the increased investment in the market, deployment of the technologies such as smart meters, EV chargers, and other infrastructure technologies which are expected to boost the market growth of the smart grid market during the forecasted period. However, due to the low accessibility to electricity especially in the underdeveloped nations and the poor regulations and initiatives to modernize and expand the grid infrastructure by the government is limiting the growth of the smart grids market.

The smart grids market is primarily driven by the regulatory pressure for reducing carbon emission, the increasing electricity demand, and adoption of the renewable generation to improve efficiency in energy conservation and consumption. Further, the rise in the population, industrialization, rising concern over the environment due to fossil power stations and urbanization is pressurizing the government to plan regulatory standards regarding carbon emission. The rise in awareness regarding the benefits of the smart grid technology like reduced energy consumption and money saving for the end-users such as residential, commercial, and industrial. 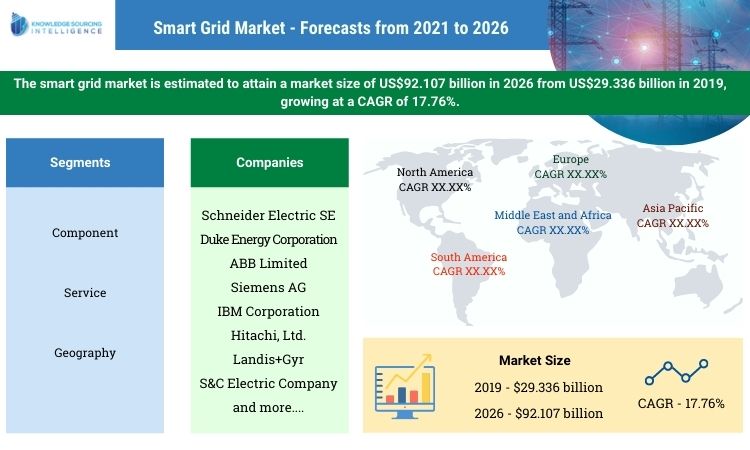 By hardware, the market is segmented into Sensors, Programmable Logic Controllers, Smart Meters, and Networking Hardware.

The smart grid market is segmented by service into Consulting, Deployment and Integration, and Support and Maintenance.

The smart grids market as the region is segmented as North America, South America, Europe, the Middle East and Africa, and the Asia Pacific regions. North America is expected to hold the largest market share and dominate the market during the forecasted period. This is mainly due to the significant growth and implementations of technological advancement including in the areas of smart grid distribution management, distribution automation, and advanced metering infrastructure. The increasing investment in the smart grid and smart city projects and the rising requirement for better smart grid mechanisms are driving the smart grids market in the region. Also, the government has mandated various policies and the emergence of electric vehicles which is driving the market of smart grids. The Asia Pacific is exhibiting the highest growth rate during the forecasted period on account of the adoption of renewable energy in the regions, especially in remote and rural communities.

The outbreak of the Covid-19 pandemic has impacted every industry including Smart Grid Market. The lockdown across the globe in 2020 and continued restrictions in 2021 has disrupted the production activities across the globe, this is mainly due to the disrupted supply of the components and equipment by the suppliers of the Asian countries. However, the demand for smart systems is expected to rise to manage the grid operations to reduce the interventions by the consumers.

Q5. What factors are anticipated to drive the smart grid market growth?
A5. The smart grids market growth is primarily driven by the regulatory pressure for reducing carbon emission, the increasing demand for electricity, and adoption of the renewable generation to improve efficiency in energy conservation and consumption.