The meat and poultry testing market is expected to grow at a compound annual growth rate of 5.69% over the forecast period to reach a market size of US$13.318 billion in 2026 from US$9.041 billion in 2019. The prime factor driving the market is the rising consumption of meat and poultry products owing to the growth in preference for a protein-based diet. Over the past decades, with increasing disposable income and rising health concerns, consumers are bending toward a more protein-rich diet, than carbohydrates-rich. Moreover, with rising adulteration, contamination, and foodborne disease, food testing has become inevitable. As per a report by Food Standard Agency (FSA), in the U.K., 10% of the food shelved in the U.K.’s supermarkets is contaminated. Further, food contamination is the source of foodborne illness.

It becomes crucial for the meat and poultry industry for testing the presence of pathogens as they are life-threatening. The common pathogens found in meat and poultry are salmonella, Campylobacter, E. coli, Listeria, Shigella, and Cyclosporin. Of these Salmonella is the most frequently occurring and life-threatening. As per a report by the Centre for Disease Control and Prevention, U.S., 1.4 million people are annually affected by Salmonella, in the U.S. alone, and 450 of them lose their life. Post-Salmonella, Campylobacter is the second most frequently occurring disease due to contaminated meat and poultry consumption. Around 1.3 million people suffer from Campylobacter in the U.S. alone, in a year. E.coli as well is a dangerous pathogen that causes blood clotting, as it produces Vitamin K2. 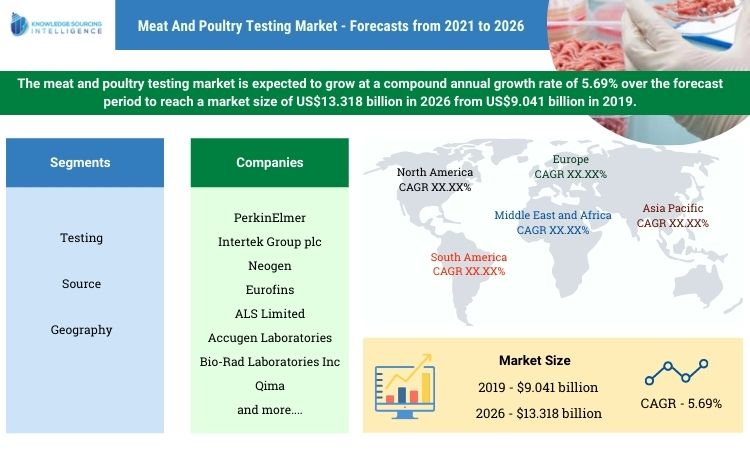 It is important to test for bacteria and other contamination to prevent diseases such as food poising, diarrhea, etc. testing for allergens facilitates sensitive humans to consume accordingly, whereas nutrition information is required for better consumer awareness regarding their intake. Rancidity Spoilage test helps in determining the shelf life of the product, environmental suitability, and other consumption cautions.

The Asia Pacific region is also estimated to show significant growth owing to the rising meat and poultry industry in the region, particularly in countries like China, India, and Vietnam.

The coronavirus pandemic had a positive effect on the meat and poultry testing industry. Experts say that the covid virus emerged in humans from the consumption of bats, from Wuhan’s open-air wet markets, where animals were killed on the spot, without any testing. The spread of the virus resulted in a rise in safety standards, including the revision of standards for the food and beverage industry. Further, government regulations mandate the testing of raw and processed food and beverages for the presence of viruses, pathogens, bacteria, or other contaminations. This has boosted the demand for food testing, especially meat and poultry testing.

Q3. What is the size of the global meat and poultry testing market?
A3. The meat And Poultry Testing market was valued at US$9.041 billion in 2019.

Q5. What factors are anticipated to drive the meat and poultry testing market growth?
A5. The prime factor driving the market is the rising consumption of meat and poultry products owing to growth in preference towards a protein-based diet.