A wearable health sensor is a device that is worn by the consumer to monitor the various biomarkers of health. The growing prevalence of various chronic diseases such as diabetes, cardiovascular diseases, cancer, among many others, supplemented by a growing aging population around the world, is prompting an increased need for continuous health monitoring and hence is surging the demand for devices like wearable health sensors. Furthermore, the increasing miniaturization of health sensors is another major factor anticipated to augment the growth of the wearable health sensor market during the forecast period. 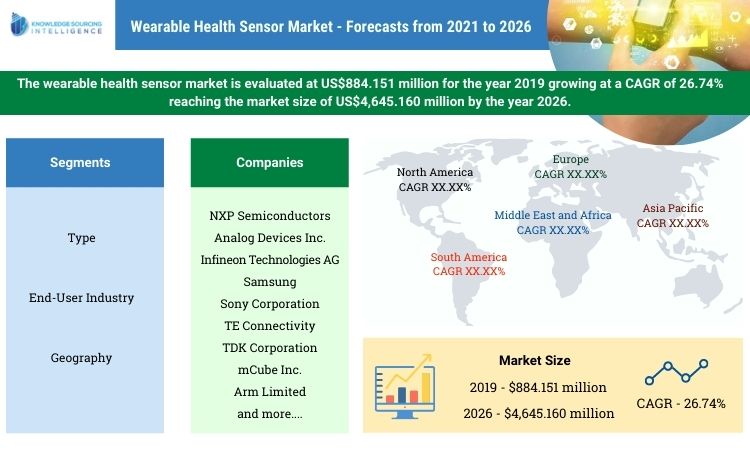 The medical device industry is utilizing the advancements in technology and integrating it with the diseases and disorders of human beings and consequently providing viable solutions for the same. With the advancements in technology, health sensors have been able to get miniaturized to an extent so that they can be wearable. Hence, various medical device companies have been taking the advantage of miniaturization and are launching new products in the market. For instance, in July 2021, Rockley Photonics launched a wearable digital health sensor system that monitors various biomarkers in the human body, such as blood pressure, glucose trends, core body temperature, alcohol level, body hydration, among other biomarkers. In February 2019, VivaLNK announced the launch of a medical wearable sensor equipped with an Internet of Health Things (IoHT) data cloud. The device informs the wearer about its health deterioration through its analysis. The launch of such products is anticipated to further increase in the coming years with the continuous miniaturization of health sensors. This is anticipated to propel the growth of the wearable health sensor market during the forecast period.

Q2. What is the size of global wearable health sensor market?
A2. Wearable Health Sensor Market was valued at US$884.151 million in 2019.

Q5. Who are the major players in the wearable health sensor market?
A5. Prominent/major key market players in the Global Wearable Health Sensors Market include Panasonic Corporation, NXP Semiconductors, Analog Devices, Infineon Technologies, and Samsung among others.