The global flow battery market is expected to grow at a compound annual growth rate of 26.53% over the forecast period to reach a market size of US$1,727.554 million in 2026, from US$332.718 million in 2019. The market is expected to surge in the coming years, because of the rising usage of flow batteries for renewable energy and applications. There has been a surge in the solar and wind energy companies, that have been looking for novel and advanced solutions to keep and maintain the flow of electrons, when the sun doesn’t shine or when the wind ebbs. Flow batteries are used in these applications, as they are capable of storing sufficient electricity to power hundreds and thousands of applications, for a substantial number of hours. Another major advantage of a flow battery is that the material used in the battery can be reused and cross-contaminated across the negative and positive electrode components. Major companies have been spending a significant sum of capital to develop novel and advanced solutions for the market. These trends are expected to have positive development for the market, during the forecast period.

The growth in solar energy demand.

According to the United Nations, the decade of significant investments in the period between the years 2010 to 2019, quadruples renewable capacity, globally, from approx. 414 GW to around 1,650 GW. Solar power and capacity hold a major share in renewable capacity growth. Its capacity rose more than an estimated twenty-six times between the years 2009 to 2019. The capacity rose from 25 GW to approx. 663 GW. The total investments in renewable energy were around USD 2.6 trillion in 2019, out of which USD 1.3 trillion were invested in solar energy and power. The solar capacity of 663 GW by the year 2019, was sufficient to provide electricity per annum to around 100 million homes in the United States of America. Companies have been developing novel and affordable solutions in recent years, which is expected to drive the overall market growth during the forecast period. The cost-competitiveness had been down 81% for solar PV since the year 2009, till the year 2019. According to the OECD and the United Nations, solar energy and solar power, have been the fastest-growing energy source in the world. The two organizations also estimated that by the year 2040, solar energy or solar low carbon technologies, could provide and supply, more than 30% of the global energy supply. Major countries have been investing a significant sum of capital to increase and enhance their overall solar capacity. According to the International Energy Agency (IEA) Study in the year 2019, China had a major share in the solar PV capacity, with approx. 32.6% of the worldwide capacity. The country had a capacity of 204,700 MW in the year 2019. The United States had a share of approximately 12.1%, with a total capacity of 75,900 MW. Japan, Germany, and India had a share of around 10%, 7.8%, and 6.8%, with a total solar PV capacity of approx. 63,000 MW, 49,200 MW and 42,800 MW. Major companies and institutions have been developing novel and advanced flow battery solutions for the market. For instance, in September 2020, researchers and scientists at India’s prestigious Indian Institute of Technology, Chennai had announced the development of a novel kilowatt scale vanadium redox flow battery, intending to store energy and electricity generated by solar and wind projects. The researchers also stated that the novel system could be deployed directly for industrial-scale stacks, and especially for grid-level storage. This development is expected to have a positive impact on the market during the forecast period. 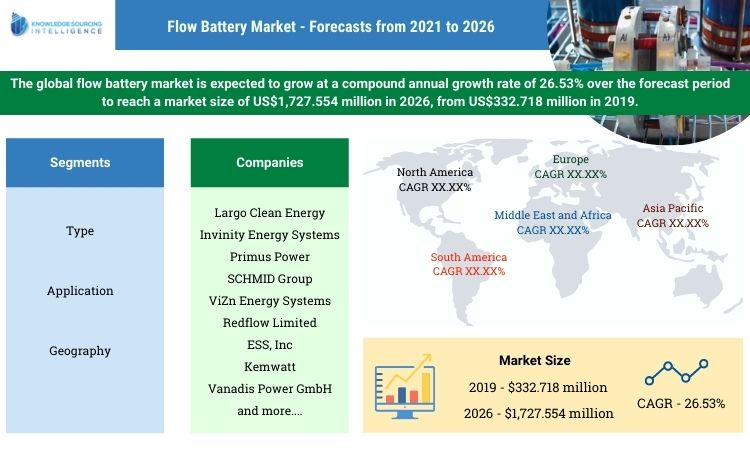 According to the Global Wind Energy Council, 60.4 GW of wind energy capacity was installed in the year 2019, globally. The installed capacity saw an approx. 19% surge from installations as compared to the year 2018. The report also stated that the total wind energy capacity was at 651 GW, in the year 2019. The market is being driven by the growth of wind energy installations in The United States and China, as both of these nations accounted for 60% of novel capacity in the year 2019. The International Energy Agency stated that net wind capacity installations were expected to reach 65 GW capacity, by the year 2020. According to the International Energy Agency, 350GW of wind power is expected to be added, worldwide, by the year 2050. There has been a surge in the development of offshore wind technology, which is expected to drive the market, during the forecast period. An increase in investment in the development of advanced and innovative flow battery solutions for wind power is expected to have a positive impact on the market.