The global anti-jamming GPS market is expected to grow at a compound annual growth rate of 10.13% over the forecast period to reach a market size of US$7.228 billion in 2026, from US$3.679 billion in 2019. GPS Anti-Jamming is used in the protection of GPS receivers from international jamming and interference. It reduces the effect of jamming and interference which allows the GPS receiver to operate and function freely and correctly. The market is expected to surge in the coming years, due to the rise of GPS anti-jamming in modern military and defence technologies and civilian applications. There has been a surge in investments and funding, intending to develop and adopt novel GPS anti-jamming technologies for different applications. Major companies and institutions have been investing a considerable sum of capital in the development of novel and advanced anti-jamming solutions. For instance, Raytheon provides anti-jamming products for the protection of the weak links and points in modern and novel infrastructure systems, which include battlefield and modern warfare systems. The company has been developing and providing advanced digital and analogue GPS anti-jamming systems to the plethora of global military forces. Currently, the company provides GPS anti-jamming systems to the United States Department of Défense, the UK Ministry of Defence, and more than twenty other nations. Other players have also been making significant developments in the market. With the rise in the investment and development of advanced solutions, the market is expected to surge at an exponential rate during the forecast period. 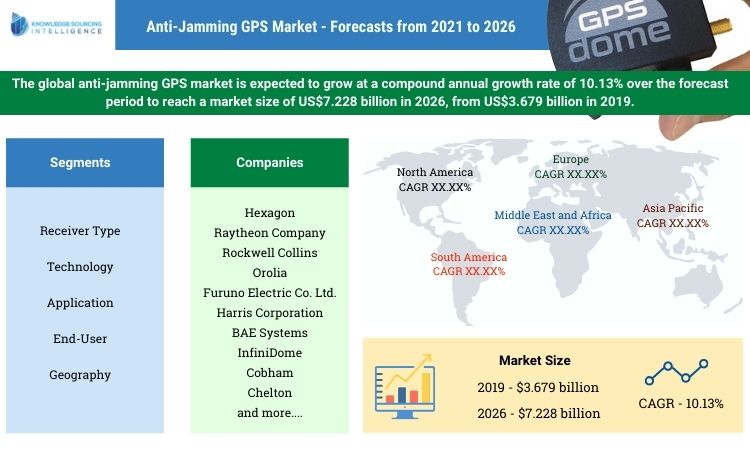 The market is expected to surge in the coming years, due to the rise and growth in military expenditure, worldwide. Countries have been adopting novel, innovative and advanced solutions. According to the data given by the Stockholm International Peace Research Institute, global defence spending had reached almost US$2 trillion in the year 2020. The United States has been the biggest spender, with total spending of around US$778 billion in the year 2020. The country has also been adopting novel and advanced GPS anti-jamming solutions, in the past few years. For instance, in May 2021, BAE Systems, one of the major players in the market, announced that it had been awarded a US$325.5 million contract by the United States Defense Logistics Agency, to supply novel and advanced military code GPS modules. The novel modules would provide secure and reliable positioning, with anti-spoofing and anti-jamming capabilities. China and India are also making significant developments in the advancement and enhancement of their defence capabilities. The country’s had an annual defence budget of US$252 billion and US$72.9 billion in the year 2020. Other countries such as Russia, the UK, Saudi Arabia, and Germany are also expected to make significant developments in the market, during the forecast period. These countries had also increased their defence expenditures in the last few years. The annual defence budget of these nations in the year 2020 was US$61.7 billion, US$59.2 billion, US$57.5 billion, and US$52.8 billion, respectively.