The market is expected to surge in the coming years, due to the growth of digital advertising by various corporations, institutions, and others, worldwide. Digital-out-of-home advertising has been a major growing method of advertising, worldwide. It has been offering and providing several advantages, like improving and targeting traffic data. Moreover, it has also increased the creative advertising ability, which is essential to attract customers. According to several official surveys conducted in the past few years, there has been a significant surge in the popularity of DooH services in countries and regions such as the United States, Europe, China, and India.

Major firms and corporations have been making significant developments in the market. 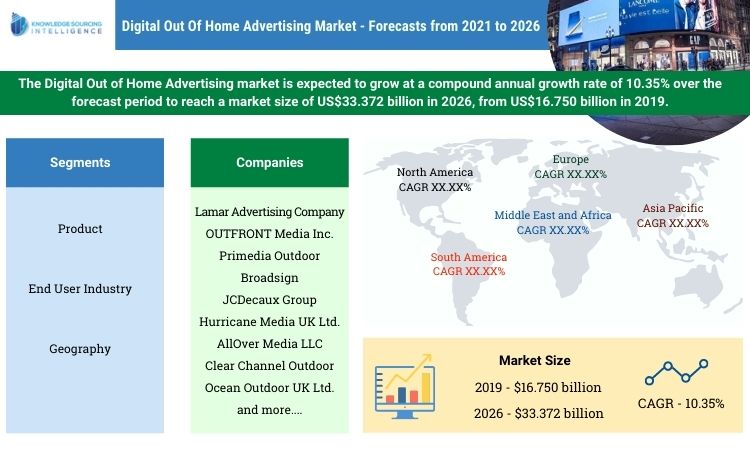 Growth in the retail sector

The market is expected to surge in the coming years, due to the rising demand for digital out-of-home advertising by retail sectors, worldwide. DooH media and advertising has proven to be a major source of enhancing and increasing awareness, driving and growing more retail store visits, developing brand equity, and enhancing overall retailing advertising effectiveness. DooH offers considerable benefits to retailers. With location-based messaging, it allows a consumer to have last moment store turns and purchase decisions at the last moment. Major companies have been making significant developments in the market. For instance, in June 2021, Grocery TV announced that it would be expanding its digital advertising network to around 6,000 retail locations across key DMAs, which also include New York, Chicago, and Los Angeles. Grocery TV, which was launched in 2019, had become one of the biggest DooH advertising networks in grocery retail.