Industrial PCs refer to the computers specifically made for use in industries and are highly reliable and efficient. The computers are designed to operate in harsh environmental conditions like extreme temperatures, high humidity, high shock, and vibration, among other conditions. These computers have a longer product life cycle. One of the major factors which are anticipated to drive the industrial PC market growth is the rise in industrial automation around the world. This is calling for an increase in the demand for industrial PCs to handle a variety of processes in the industrial sector. Also, the advantages that industrial PCs provide such as increased productivity, reduced operational costs, and improved quality of products are expected to propel the market growth. Industrial PCs are highly expensive in the beginning and require high maintenance costs which is one of the factors which is anticipated to negatively impact the market growth during the forecast period.

The recent outbreak of the novel coronavirus disease is anticipated to positively impact the market growth. The key factor supporting the positive impact is the restrictions in activities around the world and the presence of a fewer number of workers due to Covid-19 guidelines, which led to the boom of industrial automation and hence industrial PCs. The phase led to advancements in artificial intelligence, machine learning, and IoT which led to increased automation in industries. According to a non-profit association Society of Manufacturing Engineers, North America, the pandemic has led to an increase in automation and robotics. 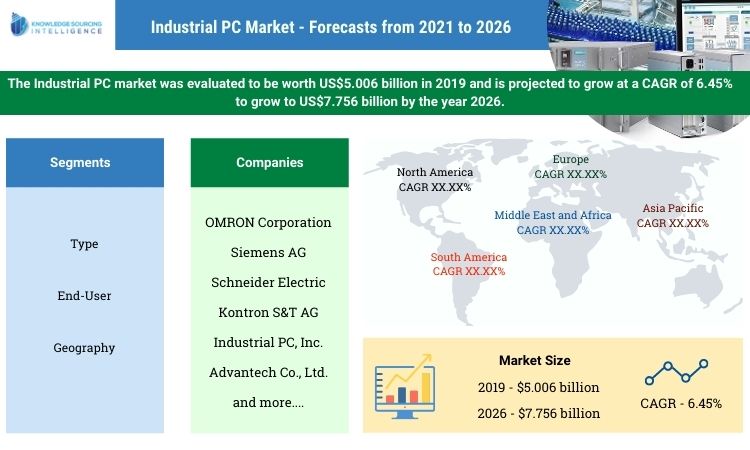 Rise in automation in the manufacturing and industrial sector.

In November 2019, the BMW Group announced a partnership with the German company Beckhoff Automation is which the latter is to supply the Industrial PC (IPC) technology to BMW Group for use in car manufacturing through 2030.

In February 2019, the Japanese company Mitsubishi Electric Corporation expanded its MELIPC series by launching two new MI3000 model industrial PCs – MI3315G-W and MI3321G-W. The models are aimed to improve the productivity of industries by visualization of data.

Asia Pacific region to witness the highest growth in the market

Geographically, the Asia Pacific region is anticipated to witness the highest growth in the market owing to the presence of large-scale manufacturing countries in the region like China, and with the growing penetration of IoT and artificial intelligence in the region, industrial automation in the region is expected to boost up leading to the growth of industrial PC market during the forecast period. The North American region is anticipated to hold a significant share due to the technological advancements in countries like the United States and Canada.