The grain silo and storage market is expected to grow at a compound annual growth rate of 5.14% over the forecast period to reach a market size of US$1,683.316 million in 2026 from US$1,185.20 million in 2019. Silo is a structure where materials are stored, in huge amounts, before they are made available in the market. Post-harvest, grains are stored in silos for long period, without spoilage. Silos have many gates from top to bottom and facilitate aeration and acid arrangements, as required for grains. Further, the presence of lactic acid and fermented carbs helps reduce the spoilage of grains and fermentation. Storage is an integral and crucial activity since it prevents grain damage. Both, abiotic and biotic factors may destruct grains, resulting in low or unfit yield for human consumption and loss in revenue. Improper temperature and high moisture content may spoil the grains, especially those requiring a dry environment. Biotic factors such as mites, birds, rodents, insect infusion, and enzymatic actions further destruct the grain if left uncovered or stored improperly. The rising world population is leading to the growing demand for food. As per FAO, the World’s population will reach 9 billion by end of 2050, leading to increased demand for food and other products. Further, rapid urbanization is leading to reduced arable land. These factors signify the importance of food storage.

Evidence of construction and usage of silos were found in the 8th century BC ancient Greece where grains were stored in pits. In Asia as well, closed earthen pots, known as Silo pits were used to store a small number of grains. The modern silo, used to store large quantities, was first constructed in 1873 in America when an American farmer constructed a rectangular-shaped silo. However, the structure didn’t succeed owing to its shape, which raised concern when thoroughly filled. With time, cylindrical-shaped silos gained fame and succeeded in the market.

Tower silo to dominate the market

By type, the grain silo and storage market is segmented based on size, shape, and construction. While tower silo is cylindrical structured and can be constructed using wood, concrete, steel, or other materials, bunker silos are tranches, commonly surrounded by concrete walls. However, silo bags are plastic tubes, filled with the help of machines.  Tower silo requires less area for construction and lowers storage loss. Moreover, these silos are convenient while unloading and pack well, owing to their weight. Hence, the Tower silo is predicted to dominate the market. The main factor constraining the market is the high initial cost of construction. 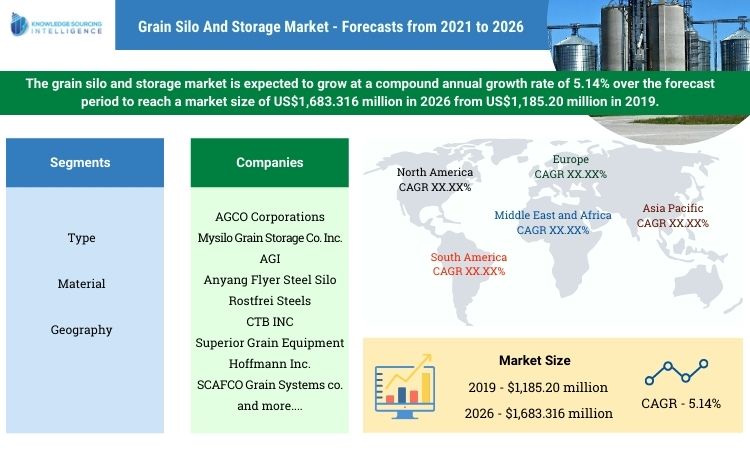 Bunker Silos are also predicted to hold a significant share of the market due to their large storage capacity, inexpensiveness, ease of storage, and faster uploading rate. However, bunker silos have higher initial construction costs and require great care during filling and packaging. Moreover, this alternative is not suitable for smaller heard. Also, tractors or loaders are required to load these bunkers, increasing the cost for farmers. Silo bags require the least capital investment along with flexible storage and amount. But these bags require special care and attention, as compromised bags result in loss of stored grain. Further, silo bags are made up of plastic, raising environmental concerns. despite these hindrances, silo bags share a noteworthy amount of market and are anticipated to grow.

Steel silo has a promising market

By material type, grain silos are segmented based on the material used in construction. Steel, wood, clay, timber, plastic, and many other materials are used in the construction of silos, particularly tower silos. Of these, the steel used in the construction of silos is the most efficient storage structure. The steel silo is leak-poof and prevents biotic infiltration in the storage. Further, using computer technology, it becomes easier to control the environment inside the structure, for moisture and temperature control. High-quality steel used in silos is up to 10 times more resistant to environmental corrosion, as compared with low-quality steel and other alternatives. The major constraint faced by this segment is the high initial cost of construction, which may not be borne by small and medium farmers. Owing to these features, steel silos have a significant share in the market and are forecasted to grow at an exponential rate.

North American Region has a significant share of the market

The North American region dominates the market, owing to its state-of-art infrastructure and financial well of farmers. Moreover, the rising adoption of technology in the farming and agriculture industry is another prime reason behind the surge in growth. Further, robust production as a result of increased yield will boost the demand for safe storage such as grain silos.

The Asia Pacific region as well is estimated to show significant growth, though the area is severely constrained by financial requirements.  Small and medium farmers dominate the region, and cannot afford huge investments in technology. Thought governments of the area are undertaking considerable steps to promote the construction of Silos. The government of India, for instance, removed the mandatory requirement for railway connectivity near the storehouse in January 2020. The government plans to incorporate a hub-and-spoke system with the help of a Public-Private Partnership. Using this system, the government succeeded in the construction of 1.25 lakh tones of silos and plans further increase the potential.

The coronavirus pandemic had a positive effect on the Grain Silo and Storage industry. Due to a nationwide shutdown, supply channels were severely disturbed, resulting in a huge piling of stocks. The fear of spoilage and loss of revenue increased the demand for safe and convenient storage systems.