Mixer wagons are agriculture equipment that facilitates the weighing, mixing, and distribution of feed for farm animals. It is important that the equipment mixes the material and provide a proper structure to the feed so that nutrients are mixed and do not remain concentrated in some parts. Further, a structured feed with an appropriate ph level lowers health problems, increasing rumination, increases food intake, and has feed conversion efficiency. The prime factor driving the demand of this market is a surge in demand for dairy products along with rising health concerns. As a result of higher living standards, people are becoming health conscious and are demanding quality products. In the dairy industry, quality is obtained with the health of the cattle. Mixer Wagons are equipment that ensures health by providing the proper structure to the feed along with maintaining ph level. Rising disposable income and technology awareness are other factors that surge the demand of the market. By type, the mixer wagon market is segmented into paddler and auger. By size, these wagons come in small, medium, and large sizes as per the farm size. By geography, the market is segmented into North America, Europe, Middle East, and Africa, and the Asia Pacific region.

The Vertical and Horizontal augers dominate the market of mixer wagons. The Vertical augers contain up to 3 augers and move the content from top to bottom. The Horizontal auger can contain up to 5 augers and move the mixing content from front to back and top to bottom. The paddler, however, moves the content from front to back. The wagon then distributes the mixed content equally, either automatically or manually, or both. The size of the mixer wagon depends on the farm size and the number of cattle to be fed. 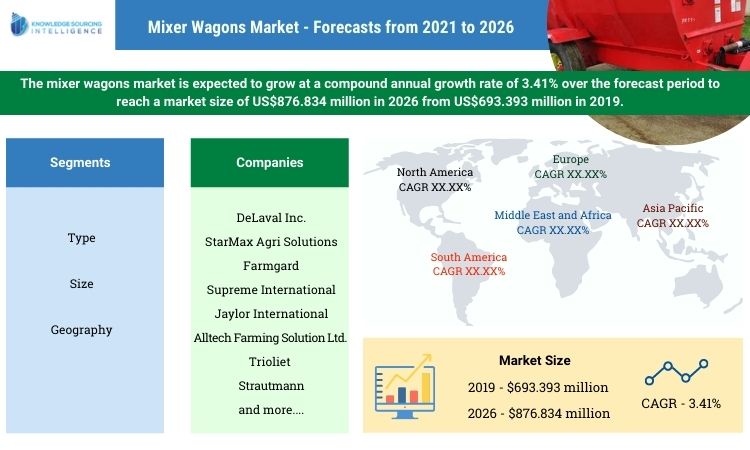 The North American region dominates the market, owing to its state-of-art infrastructure and financial good farmers. However, the rising adoption of technology in the farming and agriculture industry is another prime reason behind the surge in growth. Moreover, the region is also the largest consumer of beef and meat products. This is further boosting the demand for quality dairy and meat products. The Asia Pacific region as well is estimated to show significant growth, though the area is hindered majorly by financial requirements. Owing to the rising meat industry in countries like China and India. The market has a wide scope in the region.

The coronavirus pandemic had a positive effect on the mixer wagons industry. Even though the short-term supply and demand or damaged due to disturbed manufacturing processes and revenue loss, increasing health consciousness and emerging demand for quality food is expected to boost the demand for the adoption of technologically advanced methods in farming and animal husbandry.

December 2020, Siloking introduced its straw chopper version for some mixer wagons manufactured by the company at the EuroTier digital awards. Farmers often mix straw with fodder for structural effectiveness or at times of fodder shortage. Cattle, however, avoid straw during food intake. Siloking’s straw chopper firmly chops down the straw and mixes it well with feed.