The global agricultural machinery market is expected to grow at a compound annual growth rate of 8.12% over the forecast period to reach a market size of US$214.220 billion in 2026, from US$124.027 billion in 2019. The market is expected to surge in the coming years, due to the rise in global food security, adoption of novel and advanced agricultural machines and equipment for better yield and output, and other related factors. With the and shrink and the reduction in the area of arable land, worldwide, it has become imperative for agricultural players and farmers to minimize the waste and use better and advanced equipment and machines for harvesting, cultivation, and others. The growth in global and urban population, rise in disposable income is expected to have a positive impact on the market, in the coming years. According to the data given by the world bank, globally, around 55% of the population resides in urban areas in the year 2019. By the year 2045, the global urban population is expected to increase and surge by around 1.5 times to approx. 6 billion people. This development is expected to increase the demand for global food security, which is expected to be one of the major drivers for the market, during the forecast period. Moreover, major companies have been investing a significant sum of capital to develop novel and advanced agricultural machinery for the market. These developments are expected to have a positive impact on the market, during the forecast period. 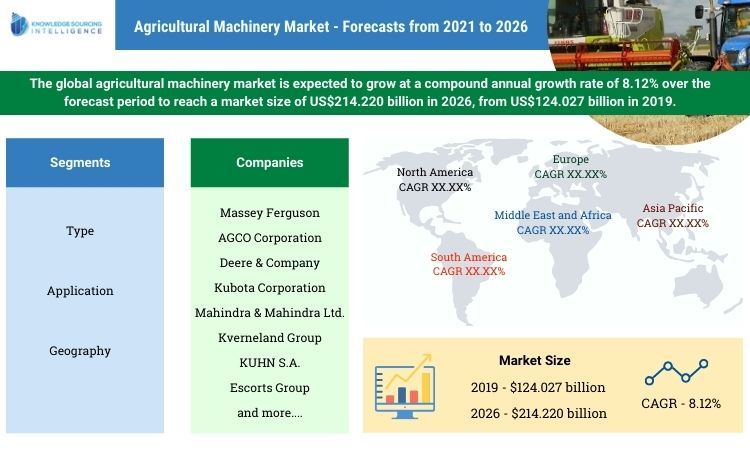 Increasing focus on food security is expected to be one of the major drivers of the market. Factors such as the rise in population, climatic change, rise and surge in disposable income, and growth in water scarcity, globally, are pressurizing governments and institutions, worldwide, to combat food insecurity challenges. According to a new global report on the food crisis by the United Nations, approx. 108 million people in the world were suffering from food insecurity in the year 2016. Moreover, the COVID-19 pandemic had also put a significant number of people below the poverty line and had severely impacted their growth. Rising population is also leading to expanding urbanization which, in turn, is leading to a decline in the available arable land area in the world. Given the limited scope for expanding agricultural land and the available water resources, the agricultural sector is required to improve productivity with efficient resources and advanced machinery and solutions, to secure crops to meet the mushrooming food demand. According to the United Nations, the global population is expected to grow by 2.3 billion, between the years 2009 and 2050, to reach 9.1 billion.

The global demand for cereals, for both animal feed and food, is expected to reach approx. 3 billion tonnes by the year 2050. With the increasing agricultural trade, globally, the demand for good and cordial quality food had increased at an exponential rate, in the last few years. Food security and protection have become imperative and essential, as the countries have been demanding high-quality food and crops for their respective citizens and population. According to the World Trade Organisation, agricultural products exports saw the biggest surge of 3.1%, per year, and rose by 36% in the year 2018, as compared to 2008. There is sufficient evidence that suggests that mechanization has a positive impact on productivity, agricultural profitability and has enhanced the rural landscape. The United Nations Food and Agriculture Organisation had concluded and specified that the major aim of agricultural mechanization is to reduce labor. Moreover, increasing overall productivity by growing the level of cultivated land, updating and enhancing executive operations to get more power, moving towards rapid industrialization, and improving and enhancing the livelihood of rural farmers are some of the major goals and tasks of agricultural mechanization.

Major companies have been investing a significant sum of capital into the innovation, advancement of novel machinery and equipment. It has been proved that with industrial growth, mechanization technology changes and varies, and this ensures the overall social and economic progress of the farmers. In western countries, such as the United States and Canada, the adoption of novel and advanced machinery has enhanced their agriculture sector. In the Asia Pacific region, there is a huge dependence on manual labor, but with the increasing income, favorable government policies, the agricultural machinery market in the region is expected to surge at an exponential rate, during the forecast period. Moreover, the legalization of cannabis in some regions, worldwide, is also expected to have a positive impact on the market. Advanced and innovative machinery is used in the cultivation of cannabis buds and flowers, which is expected to drive the market. Some of the latest and novel developments in the market are:

Q3. What is the size of global agricultural machinery market?
A3. Agricultural Machinery Market was valued at US$124.027 billion in 2019.