NOR flash is most often used in applications where individual bytes of data need to be written and read and is most often used where random access and execute-in-place access techniques are required. As each read access takes the same amount of time, sequential read access is no faster than random access. Erase/program cycles can often belong. Today’s NOR flash devices are available with capacities in the megabits and low gigabits range. Depending on the device, individual bytes or sectors must be erased before writing data, with erase/program speeds typically below 1 MB/s. NOR flash has high reliability and is typically rated to maintain data integrity for 20 years or more. This has led to an increased customer base for this type of flash memory over the years.

The global NOR flash memory market is estimated to grow on account of the rising demand for consumer electronics and communication devices. Furthermore, the increasing penetration of electronics in automotive and automation of industrial applications is further projected to enhance the market growth in the coming years. However, the cyclical nature of the semiconductor industry and the availability of substitutes is projected to hinder the global NOR flash memory market in the coming years.

With such an increased pace of technological revolutions taking place in various industrial sectors the demand for NOR flash memory is expected to witness a significant rise during the forecast period. Nearly every connected device in application today–from routers and sensors to security cameras and controllers in the cars–has a NOR flash memory chip inside—a type of non-volatile memory used for storage. Today¸ many NOR memory vendors are seeing the biggest growth coming from embedded applications in new markets such as automotive¸ industrial¸ medical¸ and Internet of Things (IoT). 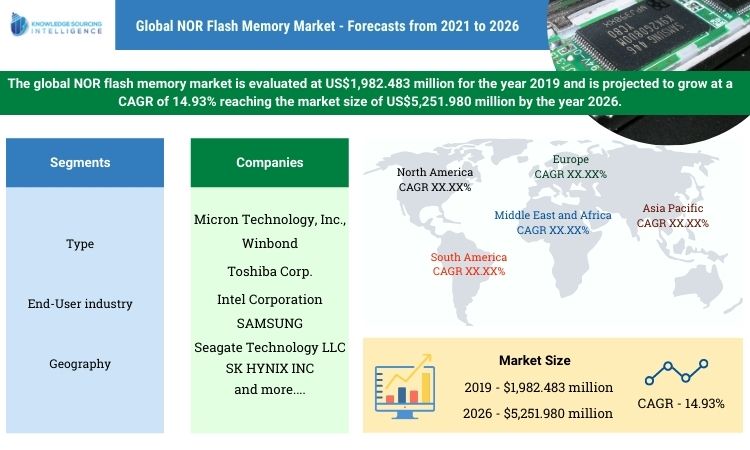 The advent of COVID-19 had an adverse impact on the global Nor flash memory market. The immense downturn in the global manufacturing, technological industries has been a significant reason for the decline in the demand for Nor flash memory at a global level. The market was impacted due to several projects around the world getting stalled during the period which in turn resulted in the decline in the demand for analog semiconductors. The temporary decline in the market is expected to recover starting from the first and second quarters of the year 2021 owing to the gradual lifting up of lockdowns which is expected to ease the operations and the supply chain. The development in the coming years will be fuelled by the stalled investments in the sector which is expected to resume in full strength once the pandemic is over.

The developments in the sector have resulted in the increase in demand for the NOR flash memory as more advanced technologies came up and the applications are rising with new upcoming and ongoing projects.

The growth of the Nor flash memory market is fuelled by the increasing applications of the product in several sectors. Furthermore, In August 2019, Winbond Electronics announced that their SpiStack dual-die NOR+NAND code storage product has been included on NXP’s FRWY-LS1012A board to be used with the company’s Layerscape LS1012A communications processor. Similarly, in June 2018, Cypress Semiconductor unveiled their new Semper NOR flash memory family designed for automotive and industrial applications, with an emphasis on safety and reliability.

The global Nor flash memory market players are implementing various growth strategies to gain a competitive advantage over their competitors in this market. Major market players in the market have been covered along with their relative competitive strategies and the report also mentions recent deals and investments of different market players over the last few years. The company profiles section details the business overview, financial performance (public companies) for the past few years, key products and services being offered along with the recent deals and investments of these important players in the market.