Wearable Camera Market Size, Share, Opportunities, COVID 19 Impact, And Trends By End User Industry (Sports And Fitness, Military And Defence, Manufacturing, Healthcare, Others), By Type (Head Mount, Body Mount, Others), By Product (Cameras, Accessories), And By Geography - Forecasts From 2021 To 2026

The Wearable Camera market was valued at US$4.686 billion in the year 2019 and is expected to reach US$11.966 billion by 2026, growing at a CAGR of 14.33%. Wearable cameras are portable cameras that can be attached to body parts or accessories without being discovered. The prime purpose of wearable cameras is to record the ongoing situation for better clarity. Owing to this feature, the product has a wider adoption in industries, such as crime control, healthcare, news and investigation, and sports and fitness. Increasing investment in these industries coupled with higher demand for better situation analysis through video and/or audio recording is expected to drive in significant demand. Moreover, the other reason which is expected to drive the market growth during the forecast period is the growing demand for smart wearable devices. Technological innovation in the industry has resulted in the launch of smart wearable devices for better comfort and services, which is expected to increase the demand for wearable cameras in accessories and hence drive the market growth. However, privacy issues accompanied by significant costs have the potential to constrain the market, limiting the prospects.

Based on geography, the wearable camera industry is divided into North America, South America, Europe, Middle East and Africa, and Asia Pacific region. The North America and Europe regions are expected to dominate the wearable camera market owing to state-of-art infrastructure, high sports, fitness, and law enforcement budget, and increasing adoption of the wearable device. The Asia Pacific region is expected to emerge as a prime supplier of wearable cameras and accessories owing to the emerging manufacturing industry. China, India, South Korea, and Vietnam are emerging as manufacturing hubs for electronic goods globally. Furthermore, a significant increase in disposable income is also expected to create robust market demand for smart wearables and hence provide a promising growth prospect. 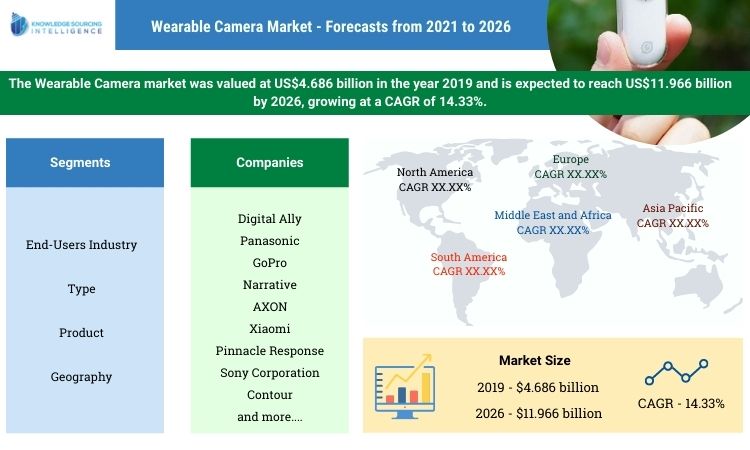 Impact of COVID-19 on the Wearable Camera Market

September 2021, Product Launch. Xiaomi Corporation launched one-of a kind smart glass, which is a smart wearable device that integrates intelligence functions into eyewear. The smart glass has the capability to capture photos, display texts, make calls, notify the user, and navigate. MicroLEDs are installed in these smart glasses which provide superior display while providing safety to the human eye.

Q2. What is the size of global wearable camera market?
A2. Wearable Camera Market was valued at US$4.686 billion in 2019.