The Wearable Computing market was valued at US$69.889 billion in the year 2019 and is expected to reach US$219.163 billion by 2026, growing at a CAGR of 17.74%. Wearable Computers are portable networks that are installed in a wearable device to connect them with other devices. Technological innovation in the electronics industry and the rise in adoption of wearable device is expected to drive market growth during the forecast period. A surge in disposable income has encouraged a tech-savvy comfortable lifestyle which has promoted the usage of wearable devices, hence creating robust demand for wearable computers as a raw material. Furthermore, growing healthcare technology and increasing healthcare wearable devices also fuel the market demand. However, significant cost and battery constraints have the potential to hamper the market growth notably.

Based on geography, the wearable computing industry is divided into North America, South America, Europe, the Middle East, and Africa, and the Asia Pacific region. The North America and Europe regions are expected to dominate the wearable computing market with high disposable income and tech-savvy lifestyle along with early adoption of new product launches. The Asia Pacific region is expected to emerge as a prime supplier of wearable computers with robust and lucrative growth in the manufacturing industries. India, South Korea, China, and Vietnam have emerged as electronic manufacturing hubs due to the availability of cheap but skillful labor accompanied by favorable government laws and regulations which promote manufacturing units. 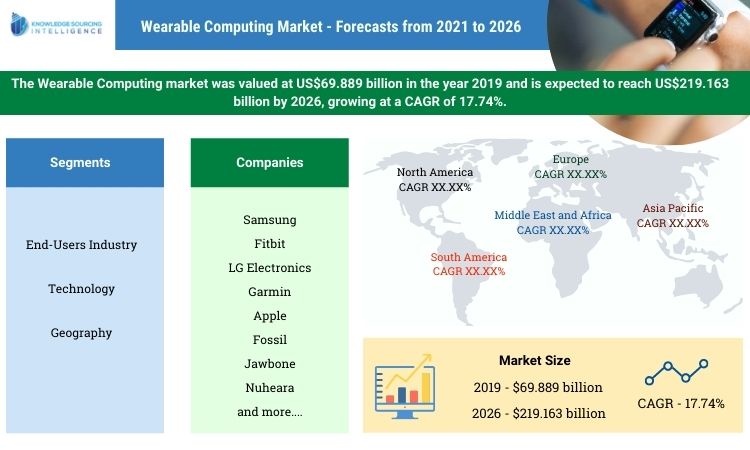 Impact of COVID–19 on the Wearable Computing Market

Q2. What is the size of global wearable computing market?
A2. Wearable Computing Market was valued at US$69.889 billion in 2019.