Thermal imaging is a technology that utilizes thermal energy and infrared radiation to gather information about various objects to formulate images of them. It uses heat to produce an image or identify an object. This technology can produce high-quality images even in low-visibility environments. The Thermal Imaging market is expected to grow owing to the increased investments in research and development by various companies, governments, and capital firms with the objective to create effective thermal imaging solutions. For instance, in 2013, the German Armed Force gave a contract to the Thales Group to supply sets of long-range cooled thermal imagers called, Sophie XF. The increasing adoption of thermal imaging in security, residential, manufacturing, and inspection services is projected to result in a surge in the market.

Thermal imaging is a blessing to the defense forces, the army, navy, and air force owing to its day-night working capability and the ability to perform well in adverse weather conditions. For instance, the thermal detectors capture the infrared radiation discharged by all the objects above absolute zero temperature. Thermal Imaging solutions are widely used by the army and navy to monitor border security and for law enforcement. In the navy, it is used for ship collision avoidance and guidance systems.

Thermal Imaging also greatly helps in the aviation industry. It mitigates the risks of flying in low light and night conditions. For instance, the German Aerospace Center and the European Aeronautic Defence and Space Company (EADS) use thermography solutions provided by InfraTec GmbH, a Dresden based company, which has developed a high thermal resolution of the infrared camera series VarioCAM® and a specialized software IRBIS to cater to the increasing need of thermal imaging solutions. The market is expected to see significant growth opportunities owing to the increasing demand for thermography software and hardware, globally. For instance, FLIR Systems, Inc. has actively been developing thermography software, such as FLIR Route creator, FLIR tools app, FLIR scree-est, etc. to meet the increasing demand.

The Global Thermal Market is segmented on the basis of Component, Industry Vertical, and Geography. 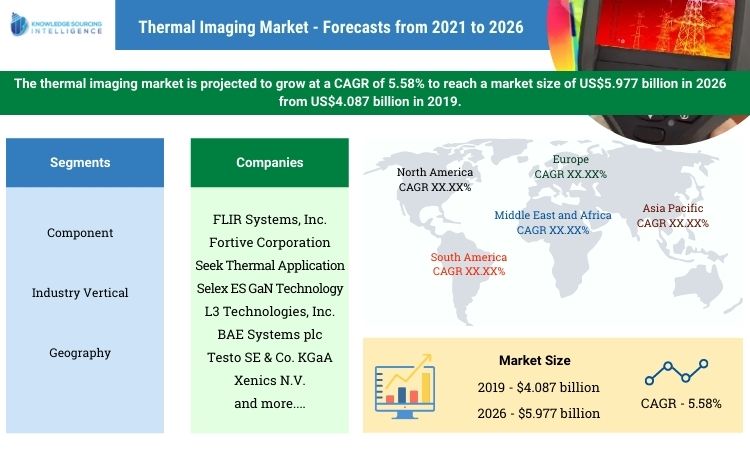 The growing demand for security and surveillance in both public and private sectors is expected to drive the thermal imaging market growth. This growth can be attributed to the need for increased security for citizens and employees of the countries. Increased urbanization is projected to impose the rise in demand for additional advanced security solutions. Furthermore, the increase in investment in the infrastructural systems along with spurring demand for professional surveillance is estimated to positively impact the thermal imaging market growth over the forecast period.

Thermal imaging is widely used for military services, certain countries like North America and Europe have started decreasing their budget for military and defense, this has resulted in the decline in the thermal imaging market for these regions. For instance, according to the European Army Interoperability Centre, Italy and France have reduced their spending on the defense forces.

September 2019- FLIR Systems, Inc. has announced the newest addition to their T-Series line, FLIR T860. They will be the first ones to create an onboard Inspection Route software, which helps streamline critical aspect inspection.

March 2019- Seek Thermal, Inc. collaborated with the Los Angeles Fire Department, to provide each one of the 3,350 firefighters the RevealFirePRO, which is a device that will enable them to fasten primary searches and locate victims quickly during emergencies.

Impact of Covid-19 on the Global Thermal Imaging Market

The COVID-19 pandemic has increased the demand for thermal imaging solutions in the healthcare and transportation industries. Several market players are developing innovative solutions that are collaborative with Artificial Intelligence. For instance, in May 2020, Honeywell International, Inc. introduced an AI-enabled thermal imager that detects elevated body temperatures at the entryway of factories, airports, distribution centers, and other commercial buildings. This product was highly appreciated in the market. It also helped Honeywell in getting the first-mover advantage in the industry as not many companies came up with such a product in a short span of time. In addition, with strict social distancing norms being imposed in all countries, the market demand for such thermal imagers gained prominence at public places and airports to trace patients.

The company profiles section details the business overview, financial performance (public companies) for the past few years, key products and services being offered along with the recent deals and investments of these important players in the Global Thermal Imaging Market.

The Thermal imaging market has been analyzed through the following segments:

Q2. What is the size of the global thermal imaging market?
A2. Thermal Imaging market was valued at US$4.087 billion in 2019.

4.3.5.Competitive Rivalry in the Industry

7.5.The Middle East and Africa