Adhesive tape refers to a backing material combined with adhesives that are used to stick objects together. There has been a rising demand for adhesive tapes from various industries like electronics and electrical, automotive, and healthcare among others which are anticipated to surge the growth of the adhesive tape market during the forecast period. However, the rising use of adhesive tapes in the automotive industry is anticipated to contribute the most to the market growth, due to the rising need for lightweight vehicles to improve fuel efficiency to curb the growing climate change concerns. Also, with advancements and innovations, various kinds of adhesive tapes have been made which can bear certain specific circumstances, such as heat-resistant tapes, and have led to a rise in the adoption of adhesive tapes for various uses replacing the other methods of joining objects, which in turn is expected to propel the growth of adhesive tapes during the forecast period.

The recent outbreak of the novel coronavirus disease had a positive impact on the adhesive tape market. As the pandemic led to lockdowns in most parts of the world, people started shopping online and there was a sudden rise in the e-commerce industry. E-commerce largely replaced the traditional way of purchasing things, which led to a rise in the demand for adhesive tapes, as they are an important part of e-commerce packaging. Although the trend for the use of e-commerce for shopping is expected to comparatively slow down after the pandemic, e-commerce will continue to grow at a faster pace than the pre-pandemic era, which is anticipated to propel the growth of the adhesive tape market during the forecast period. However, there was a short-term decline in the growth of industries like automotive and electrical and electronics, which impacted the adhesive tape market but the demand from those industries is anticipated to recover in the year 2021. 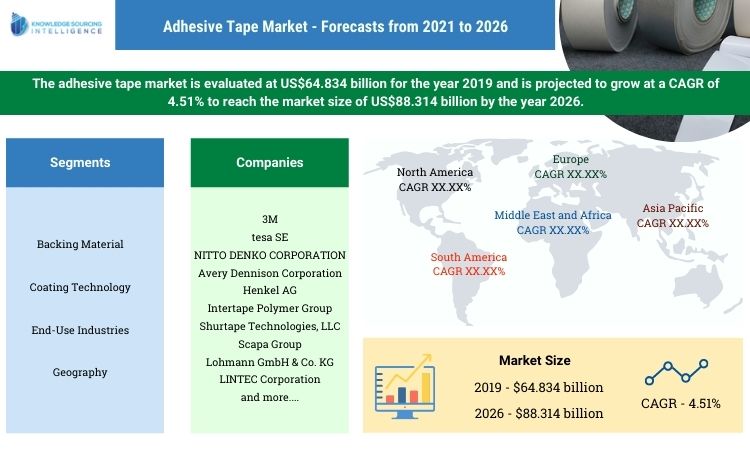 The rise in the use of adhesive tapes in the automotive industry.

One of the key factors supplementing the adhesive tape market growth is the increased use of adhesive tapes in the automobile industry, as the traditional joining techniques are increasingly being replaced by adhesive tapes, wherever replaceable, as the use of adhesive tapes helps reduce the vehicle weight and are time and cost-efficient when compared to the traditional joining techniques such as welding or soldering. Also, as the concerns regarding climate change are on the rise, there is more pressure on automobile companies to increase their fuel efficiencies. According to the Office of Energy Efficiency & Renewable Energy, U.S. Department of Energy, by reducing the weight of a vehicle by 10%, the fuel economy of the vehicle can be improved by 5-6%. It also states that the use of lightweight components and high-efficiency engines enabled by advanced materials can reduce the usage of fuel by 5 billion gallons annually by 2030. The increased awareness regarding the reduction of vehicle weight to improve fuel efficiency is anticipated to bolster the growth of the adhesive tapes market in the coming years. Various countries around the world have set their targets to cut down carbon emissions. For instance, the government of the US has recently announced to commit to reaching net zero emissions by 2050, and in April 2021, the UK announced to cut down the country’s carbon emissions by 2035. Also, the European Union announced in 2021 to reduce their carbon emissions by 55% by 2030, to curb climate change. One of the prominent solutions to increase fuel efficiencies is to reduce the vehicle weight and hence the role of adhesive tapes in the automobile has become significant over the years and is anticipated to propel the growth of the adhesive tape market in the coming years. The U.S. government had set a target to double the fuel economy from 2012 to 2025 to 54.5 miles per gallon. Although the rule has been eased a bit in 2020, the role of adhesive tapes continues to be significant in increasing the fuel economy.

The paper tapes have added advantages over plastic tapes, such as recyclability, increased packaging efficiency, tamper evidence, and temperature tolerance among others, due to the demand for paper tapes has increased and is anticipated to grow further during the forecast period. Also, the paper tapes are eco-friendly and are bio-degradable, and the increasing concerns regarding plastic waste around the world are expected to surge the demand for paper tapes. The World Economic Forum stated in an article in December 2020 that the use of plastics in packaging can be replaced by innovations in paper packaging, hence advocating the use of paper packaging materials such as paper tapes. Due to their eco-friendly nature, paper tapes are increasingly being preferred over other tapes by many organizations for packaging. For instance, Amazon India announced on June 2020 that they have successfully eliminated single-use plastics in packaging across all centers in the country, and have switched to using paper tapes. Also, Walmart Inc.’s Indian e-commerce unit announced on May 2020 that it has reduced the use of plastic in packaging by about 50%. These measures contribute to the rising demand for paper tapes and are anticipated to bolster the growth of the paper tapes segment during the forecast period.

The Asia Pacific to dominate the market.

Geographically, the Asia Pacific region is anticipated to hold a significant market share and is expected to witness substantial growth due to the rising population and rapid industrialization. There is a rise in the growth of the packaging industry in the region in recent years, which is anticipated to boost the demand for adhesive tape in the region during the forecast period. Furthermore, the rise of various industries like automotive and electronics & electrical is further projected to bolster the growth of the adhesive market in the Asia Pacific region.