The global automotive braking system market is expected to grow at a compound annual growth rate of 3.18% over the forecast period to reach a market size of US$38.784 billion in 2026 from US$32.146 billion in 2020. A braking system is an arrangement in which a combination of linkages and components such as brake lines, drums/discs, the master cylinder is done and arranged in a manner in which running vehicle’s kinetic energy to heat energy which on the other hand de accelerates or stops the running vehicle.

The market for braking systems is projected to witness substantial growth which is primarily attributed to significant growth in the demand for vehicles globally and particularly in the developing economies such as India and China among others due to the increase in disposable income and improvements in the standards of living. Also, the lifespan of braking components is also limited to a certain kilometer which in turn is augmenting the replacement market since the growing needs for component replacement will support the market growth during the given time frame. In addition, the participation by the market players in the launch of new and advanced systems and expansion of R&D budgets for the launch of new technologies further provides an impetus for market growth in the coming years. On the other hand, the rapid penetration of EVs and growing focus towards autonomous vehicles is further anticipated to propel the business growth opportunities for the manufacturers in the near future. Furthermore, the government regulations regarding mandatory requirements of advanced braking systems in vehicles along with the technological advancements in the new braking systems are further expected to amplify the demand for new braking technologies, thus also playing a significant role in shaping up the market growth during the forecast period.

The outbreak of novel coronavirus disease is anticipated to hit the market growth hard since the drastic impact on the automotive industry with production as well as demand both on the declining side have been the major factors hampering the global automotive braking system market growth particularly in the year 2020. 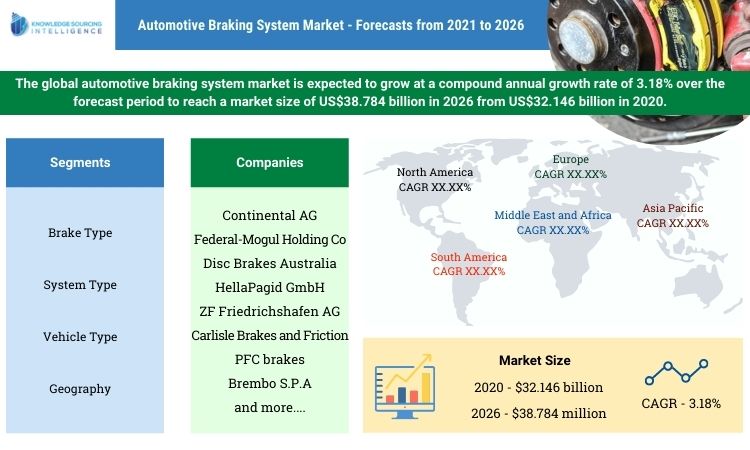 The continuous technological advancements in both the automotive industry and the automotive braking systems are expected to have a great opportunity to augment the growth of the automotive braking systems market. Autonomous vehicles are insignificant attention including the traditional automakers and the innovators to have a significant market share over the next 5 years. In addition, rapid development and innovation in the ‘Advanced Driver Assistance Systems’ will augment the market for braking systems on account of investments in Level 4 and Level 5 autonomous vehicles, wherein Level 4 no human interaction and in Level 5, human driving is completely eliminated, to make these systems safe, technologically advanced braking systems are required for safe and reliable use. However, the technological advancements in braking systems are also expected to propel the demand for the latest and advanced systems. The braking technology is continuously evolving with increasing safety concerns and government regulations. Furthermore, different advanced braking systems are evolving, for instance, Electronic Stability Control, Traction Control, and Electronic Brake Force Distribution (EBD), simultaneously, the manufacturers worldwide are spending in R&D to bring out the state-of-art technology. This shows a growth opportunity for manufacturers and vendors during the forecast period.

Governments all around the world are playing an important in propelling the market growth over the course of the next five years since stringent regulation towards the safety of the drivers by making installation of advanced braking systems mandatory in cars and buses in the developing economies is further widening up the growth opportunities for vendors and manufacturers in the coming years. This can be backed up by the fact that ten automakers including Mercedes-Benz, Tesla, and Volvo have to be equipped with crash avoidance technology by 2022, which includes AEB systems and Crash Imminent Braking Systems (Source: the U.S Department of Transportation). Similarly, the United Nations Economic Commission for Europe drafted the regulation with 40 countries, for mandatory fitment of Advanced Emergency Braking Systems (AEBS) for all new cars and light commercial vehicles by 2022.

Geographically, the Asia Pacific region is anticipated to hold a prominent share in the market since the region holds a vast automobile manufacturing base in countries like China, India, and Japan. Also, the growing investments in new manufacturing facilities are further bolstering the market growth in the Asia Pacific region over the coming years.

Q1. What is the size of the global automotive braking system market?
A1. The automotive Braking System market was valued at US$32.146 billion in 2020.