The global bus market is expected to grow at a CAGR of 3.14% from an initial value of US$41.036 billion in 2019 and is estimated to reach a market size of US$50.967 billion in 2026. In terms of units, the global market is projected to grow at a CAGR of 2.21% during the forecast period. The global bus market is expected to grow due to the rapid increase in the urban population around the world, especially in underdeveloped and developing countries, which is prompting an increased need for transportation, and hence more number of buses. Also, various developing countries, like China, India, among many others, have been making large investments in their public transport and buses, which is further anticipated to surge the growth of the global buses market during the forecast period. For instance, in February 2021, the Indian government, while presenting Union Budget 2021-22, announced an Rs 18,000 crore scheme to augment public transport in urban areas. The government stated that it would work towards raising the share of public transport in urban areas through the augmentation of city bus service.

The COVID-19 pandemic had a negative impact on the global bus market. As the pandemic led to lockdowns in most parts of the world, transportation was severely affected. Also, the manufacturing of the buses was affected due to the industries being shut down and the shortage of workers. Due to the fear of the spread of COVID-19, people now avoid using public buses. World Economic Forum stated in February 2021 that up to one-third of people in some cities have stopped using public transport because of the COVID-19 pandemic. It also stated that according to the travel habits of people in 104 cities across 28 countries, lockdowns, the rise of remote working, and stay-home orders have all meant a reduction in the volume of people commuting. A global survey by transit app Moovit showed that more than half of Americans are using public transit less or not at all. The decreased demand for the use of public buses is anticipated to continue for at least a couple of years, which is anticipated to negatively impact the global bus market. 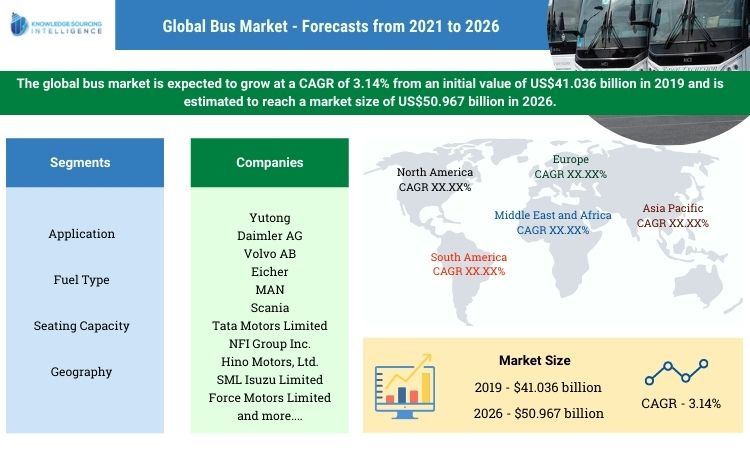 The rise in population around the world, especially in the urban areas, has led to an increase in the need for transportation, which is one of the prominent factors anticipated to propel the growth of the global bus market during the forecast period. According to data from World Bank, the worldwide urban population in 2014 accounted for 3.877 billion in 2014 which rose to 4.274 billion in 2019. In 2010, 50.65% of the world population lived in urban areas and the share has increased to 55.72% in 2019. The population growth trend is expected to continue in the future and is expected to increase to 68% by 2050, as estimated by the “2018 Revision of World Urbanization Prospects” by United Nations. The projections show that urbanization, the gradual shift in residence of the human population from rural to urban areas, combined with the overall growth of the world’s population could add another 2.5 billion people to urban areas by 2050, with close to 90% of this increase taking place in Asia and Africa. By 2030, the world is projected to have 43 megacities with more than 10 million inhabitants, most of them in developing regions. This growth in urban population puts the transportation system of the concerned region under great stress, as the demand for transportation increases. According to the UN, by 2050, it is projected that India will have added 416 million urban dwellers and China 255 million. The rapid rise in population is more prevalent in underdeveloped and developing countries, especially in Asia and Africa, which increases the need for enhanced transportation in the countries. Thus, with an increasingly urban population leading to an increased need for transportation, the increase in population is anticipated to propel the growth of the global bus market during the forecast period.

ELECTRIC BUS MARKET TO GROW AT A HIGHEST CAGR

By type, the global bus market is segmented into diesel, electric, and others. The diesel segment is expected to hold the major market share during the forecast period, whereas the electric segment is estimated to grow significantly between 2019 and 2026. The growth of the diesel segment is mainly attributed to the conventions attached to diesel buses and the reluctance in adoption by local agencies in developing countries. Moreover, the high cost and investment attached to the electric buses incentivize small local agencies to stick to diesel buses. However, the electric segment is expected to grow at a fast rate owing to the regulations imposed in both the developing and developed countries along with the grants given by the governments. Technical factors like battery optimization also play a role in the demand for electric buses. Compressed natural gas, gasoline, and hybrid fuels are studied under the others segment.

By application, the global bus market is segmented as school buses, transit buses, and others. The market growth can be majorly attributed to the growing need for means of transportation and the rising population in the urban areas. Booming urbanization and industrialization are major factors driving the demand in the global bus market globally. Growing environmental concerns and stringent emission regulations have encouraged countries to adopt electric buses for day-to-day purposes. Besides, growth in the bus market at a world level is majorly driven by growing demand in emerging economies where tourism and public transportation industries are expected to expand at an exponential rate supported by favoring government incentives and policies. According to the Bureau of Transportation Statistics report 2020, a total of 884,398 interstate buses ply locally in the US. As compared to other modes of transport, school buses are built with higher safety standards, protective seating, and rollover protection. Whereas, the transit buses are specially designed for local commute and facilitate public transport service for the general public.

ASIA PACIFIC IS THE LARGEST MARKET

Based on geography, the global bus market is segmented into North America, South America, Europe, the Middle East and African, and the Asia Pacific.  The Asia Pacific region is anticipated to hold a significant share during the forecasted period. The region is dominated by low and middle-income households, most of which are unable to afford their private vehicle. Commuting from public transportation, therefore, is preferred by the consumers. This drives the demand for public vehicles and hence the demand for buses.

Q3. What are the growth prospects for bus market?
A3. The bus market is expected to grow at a CAGR of 4.47% over the forecast period.

Q4. What factors are anticipated to drive the bus market growth?
A4. The global bus market is expected to grow due to the rapid increase in the urban population around the world, especially in underdeveloped and developing countries, which is prompting an increased need for transportation, and hence more number of buses.

4.3.5. Competitive Rivalry in the Industry